Lithuanian president Dalia Grybauskaitė received a “Woman of the year” award in USA announced by world-famous “Glamour” magazine. Lithuanian president was nominated in the category “Female Heads of State: The Chosen Ones”. The celebration brought together most powerful women on earth – those, who are changing history and are perfect examples of women empowerment.

Dalia Grybauskaitė is the first women elected as a president in Lithuania. She is so powerful and influential, that had even got a nickname of „Lithuanian Obama“. Grybauskaitė was previously Lithuania's Vice-Minister of Foreign Affairs, Finance Minister and European Commissioner for Financial Programming & Budget.

Condoleezza Rice, former secretary of state and 2008 Woman of the year, concludes that “Thanks to nominees, girls now have powerful models at the very top. With these women leaders inspiring the next generation, perhaps the concerns of today — girls’ under-education, maternal mortality, rape as a weapon of war—will have been resolved.”

Together with Ms. Grybauskaitė other 17 most powerful women were nominated, such as Iveta Radičová, prime minister of the Slovak Republic, Prime Minister of Bangladesh  Sheikh Hasina, prime minister of Trinidad and Tobago Kamla Persad-Bissessar, prime minister of Croatia Jadranka Kosor, Liberia’s “Iron Lady” Ellen Johnson Sirleaf and others. Singer Fergie was nominated as a woman of the year 2010.

This year, in 2010, 18 current female presidents and prime ministers were chosen to be awarded. This number has nearly doubled since 1990. Female leaders nowadays are changing the course of history, not only for the half of the world that is female but for us all.

Full article can be found here. Pictures borrowed from internet and FB. 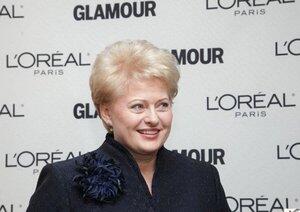