US Federal Reserve has played the ultimate interest rate card. Lower rate than 0,00-0,25 % on federal funds is hardly possible, the lowest since 1954. If this will not boost the American and world economy, what then ? Bank of Canada already cut the key lending rate to 1,5 % last week. Will low interests and low oil prices re-fuel the world economy ?

American leaders are running low on options if this doesn’t give the expected effect.. At the same time Europe is trying to reorganize and fight back the recession.

Europe’s inflation rate dropped to 2,1 percent in November, the lowest for two decades as oil prices fell below 40 USD per barrel, lowest level the  last 4  years.

European national banks are coming after USA and Canada step by step. We hereby present review of key interest rates in some European countries.
The  Libor for Dollars, the benchmark for $360 trillion of financial products worldwide, is set by a panel of banks in a survey by the BBA and typically published before noon each day in London. Euribor is released by the European Banking Federation earlier in the day.
According to Bloomberg “Today the cost of borrowing in dollars in London for three months tumbled after the Federal Reserve chopped its key interest-rate target to as low as zero and said it will flood the economy with cash.”
Bank of England already set the key interest rate to 2,0 % 4th December.  Germany keeps interest rate about 3,0 percent. The Riksbank in Sweden made recently a 1,75% cut to 2,0 %. The Bank of Finland keeps a steering rate at 2,5%, while the Denmark’s National Bank is still keeping their key interest rate at 4,25 %, since 5th December. Bank of Norway cut the rate 17th Dec  1,75% to 3,00 %. The bank expects a rate about 2,0 next year.
In the Baltic countries we find another situation. The central Bank of Latvia still keeps their key interest at 6,0 % stabile since May 2007. According to a press release “The central banks in Sweden and Denmark have decided to enter into swap agreements under which Latvijas Bank, the central bank of Latvia, may borrow up to EUR 500 million in exchange for Latvian lats.”
Bank of Lithuania keeps the lowest interest rate for ovenight loans at 3,00 %, while lowest rate in  Eesti Pank is 5,18 %. According to a statement from the bank „Being part of the solid Nordic banking groups has helped us cope with the fickle market situation. Earlier measures have also supported financial stability, including Eesti Pank's decisions to establish higher capital and liquidity buffers to banks and the recent measures taken by the Swedish government and the Riksbank”.  Recession in Estonia is expected to lead to  about 4 % decline in GDP in 2009.
The National Bank of Poland is still keeping a reference interest rate at 5,76 percent. Lowest lending rate from Bank of Russia is 10,00 %. 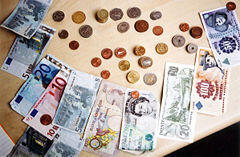