In the early 1990s Yugoslavia began to disintegrate, triggering a series of vicious wars as ethnic groups contested territories. I have been doing some work looking at current development in the countries of the Western Balkans. Although conditions have certainly improved over the past decade, and the World Bank now rates them as “upper middle income countries”, it is clear that long-lasting economic and environmental damage has occurred.

If we include Albania, where there was also a sudden collapse of the former regime, there are six small states today in this region who are not in the EU (Slovenia and Croatia, both once part of Yugoslavia are now full EU members).  Serbia has 7.2 million people and is the largest of the six. Albania has 2.8 million; Bosnia and Herzegovina  has 3.8 million; Macedonia just over 2 million; Kosovo 1.7 million, and Montenegro just over 600,000. The region lost 2 million people between 1991 and 2011.

There have been major and complex migrations. Under the regime of Enver Hoxha, Albania’s somewhat quixotic Communist ruler from 1944 until his death in 1985, there were strict controls on people’s movements, effectively preventing people from leaving the rural and mountainous areas to go to live in the cities. The lifting of these controls in the 1990s released people to move to urban areas and abroad.

The wars in former Yugoslavia created major displacements of people internally; there were forced migrations and a flow of international refugees and migrants. The overall picture today is of aging populations with negative natural increase (i.e. deaths exceeding births). Even Kosovo, which has high birth rates, experiences losses due to the scale of migration. Aging is particularly evident in the rural areas and villages

With Slovenia and Croatia now in the EU there are trade barriers and visa barriers in place that did not exist before. What were once administrative boundaries within Yugoslavia have become international borders, barriers rather than contact points. To reach the EU, citizens of Bosnia and Herzegovina, Kosovo and Montenegro, need to pass through another country. Unofficial border crossings have been closed; Bosnia and Herzegovina for instance started the closing of borders in forest areas, but also in some urban areas. When villages are shared between two countries, crossing points are locked with gates and the key is given to inhabitants of the village!

Transport networks, especially roads, of regional and international importance are limited and need improvement to reach European speed and safety standards. High speed road networks do not connect across borders (between Serbia and Bulgaria, Serbia and Macedonia) or are simply non-existent. There is no motorway in Bosnia and Herzegovina, Montenegro or Albania. With the increase in road traffic and controls at EU borders, congestion arises at checkpoints.

The railway network has both a low density and a lack of hierarchy; countries are not connected to all their neighbours. Maintaining the network and the rehabilitation of railway lines after the wars – the destruction of the rail network is estimated to be 80 percent in Bosnia and Herzegovina – needs subsidies, but countries focus investment on road networks.

The EU’s TEN-T core network Orient-East Med is expected to join the ports of Athens-Piraeus and Thessaloniki (Greece) on the Mediterranean shore, and the port of Burgas on the Black Sea (Bulgaria) to Budapest through EU member countries. Cities such as Skopje and Niš, which  were nodes on the historical route from the Mediterranean Sea to Central Europe,  will be bypassed. This is likely to create a serious loss of traffic and economic development opportunities.

Per capita levels of municipal waste have been increasing sharply in Montenegro and Albania (though they have been reduced in Serbia). Municipal waste collection is not universal. Landfill, illegal dumping and discharges remain the main means of waste disposal. Water supply systems suffer in consequence, and too often treatment plants are obsolete and/or inefficient. In Kosovo less than a third of the population has access to a sewer system; in Serbia 84% are not served by a water treatment plant.

Floods have been a frequent problem over the past decade. There have also been heat waves and droughts. The need for cross-border cooperation on these natural hazards is now recognised by the countries.

While things have certainly improved since the wars ended, this part of Europe still must travel a long road to reach EU standards, not only economically but on things like the effective enforcement of environmental Directives. A decade after the major enlargement of the EU that took place in 2004, this remains a part of Europe that has largely missed out on the benefits of the Union. 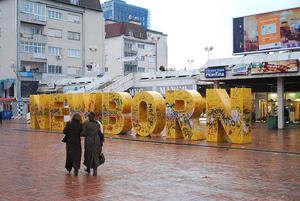