“We must do more”

"We are determined to take all necessary measures and actions needed to ensure the stability of the euro area. Since two years, we have taken steps to overcome the crisis but the immediate economic challenges are so serious that we must do more. All leaders agree to that," declared Herman Van Rompuy, President of the European Council, after the Euro Summit in Brussels on Sunday. It was the first of two summits; another one will follow on Wednesday.

“The Heads of State or Government of the euro area agreed on the objectives and outlined the strategy. They will conclude at the Euro Summit on 26 October”, so the press release published by the European Council. José Manuel Barroso, President of the European Commission said “Work is in progress and it is progressing well.”

But journalists seem to doubt an early answer. “Does euro-zone integration mean breaking up the European Union?” questioned the British newsmagazine The Economist while the German Spiegel came up with some rescue plan details: “Chancellor Angela Merkel has provided German party heads some details of the planned euro rescue package set for approval by European leaders on Wednesday. They include a Greek debt cut of up to 60 percent and leveraging the bailout fund to one trillion Euros. The measures will be put to a full vote in German parliament on Wednesday.”

"Regardless how much money is mobilized in the end - it won't rescue the euro. It will only buy time to solve the fundamental problems. The economic drifting apart of the 17 euro nations must be stopped; solid economizing is required. Because time is becoming increasingly expensive, the summit on Wednesday will have to launch real changes. That includes the installation of a powerful independent budget commissioner, as many countries are demanding. Berlin, which is insisting on first changing the EU treaty, is risking allowing the euro's slide to turn into a collapse", so the center-left Süddeutsche Zeitung. 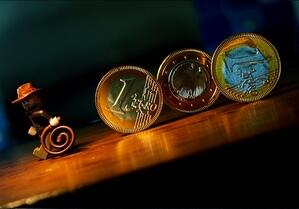