Viva Bel@rus, a film based on real events, was shown twice at the 65th Cannes Film Festival. In his movie the Polish film director Krzysztof Łukaszewicz features the story of Belarusian youth struggling for democracy. This is the first Belarusian-language film to be shown on such a level.

The movie premiere was shown at the Cannes Film Market on May 22. The film shows the modern Belarus. “A young rock musician is called up for military service and his band is put on the blacklist. In the army, he began to keep a diary on the Internet describing bullying and conditions of his service. The diary turns into an open confrontation with the regime.

The film was shot in November and December 2011 in Poland. The trailer was shown at the Berlin Film Festival in spring 2012 that helped to demonstrate the movie in Cannes.

The script was written by Belarusian journalist and activist Franak Vyachorka and Krzysztof Lukaszewicz.” (www.charter97.org)

The movie is financed by the Polish Ministry of Culture, the Polish Film Institute and French Canal+ was shot in Poland by the State Film Studio. 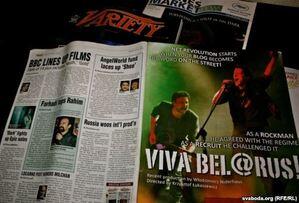