“In the Seattle suburb where I grew up, the main transportation choice most residents face is what kind of car to buy. I moved to Seattle after college and, inspired by the “car-lite” lifestyles of several friends, decided to give cycling a try. I fell in love with it. Urban cycling freed me from slow buses, parking meters, and mind-numbing elliptical machines. I arrived at work with more energy. I lost weight. I discovered charming neighborhood restaurants. I could smell fresh laundry and dinners in the oven while I pedaled home through residential streets. Getting from A to B on my bike became the best part of my day.
Recently, I won a fellowship and got to spend six months living life on two wheels in the world’s most bike-friendly cities. I brought home ten lessons, and thousands of photographs, for Cascadia:

1.) It’s the infrastructure, stupid! Amazing infrastructure makes cycling normal and safe in bike meccas, but not yet in the Northwest. For example, parked cars to the left of the bike lane not only provide a barrier between motorized traffic and cyclists, they also minimize a cyclist’s chance of getting “doored.” Most cars in Denmark (pictured) only have one occupant, the driver, and drivers get out on the left. Same goes for the Northwest.
Bikes move at different speeds than cars or pedestrians, so intersections are safer for cyclists if they have their own traffic signal rhythm. Cyclists in Copenhagen generally get a slight head start over cars so that they’ll be more visible as they cross the intersection. In the picture below, the light is red for cars, but the smaller light for cyclists is green. 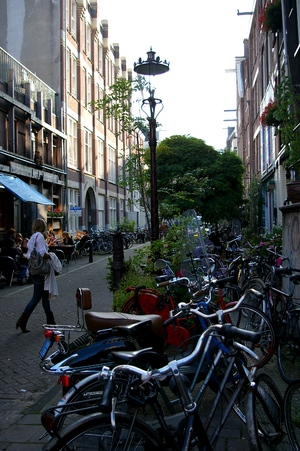 3.) It’s safer than a sofa. Sedentary living doubles the risk of cardiovascular diseases, diabetes, and obesity. Combating diseases of sedentary living requires 30 minutes of moderate exercise every day—a minimum more and more people around the world are unable to meet. “Why not introduce a broad, carefully conceived invitation to people to walk and bicycle as much as possible in connection with their daily activities?” asks Jan Gehl, a Danish urban quality consultant. Almost 40 percent of Copenhagen residents meet their minimum exercise requirements by cycling to work or school. Copenhagen’s Public Health Department calculates that even when accident costs are factored in, every mile of cycling translates to net health benefits worth US$1.30. A recent public health campaign in Copenhagen reminded residents that, “you’re safer on your bike than on the sofa!”

4.) Say “thank you.” Cyclists also save city governments money by reducing traffic congestion, stormwater run-off, air pollution, and road maintenance expenditures. Many cities are doing little things to show their gratitude. Barcelona recently installed a counter on a main route displaying the time, temperature, bike count for the day and progress toward the official annual ridership goal for that route. Copenhagen has begun putting in footrests at intersections. They say, “Hi, cyclist! Rest your foot here…and thank you for cycling in the city!”

5.) Forget speed bumps and “children at play” signs: turn streets into backyards. Dutch road engineer Hans Monderman hated traffic signs in cities and towns. His reasoning was simple. Most drivers don’t look at signs. Speed bumps and stop signs also don’t do much because drivers are notorious for accelerating to “make-up time” after each interruption. Monderman redesigned Dutch towns so that drivers felt like they were passing through someone’s backyard. Monderman’s “backyard” plans called for street furniture - benches, picnic tables, sand boxes, pea patches, trees, flowerpots, and ping pong tables. Drivers either saw or sensed the presence of people and children, and basic social laws kicked in. It isn’t polite to speed through someone’s backyard. Many residential streets throughout Europe, like the one pictured below in Basel, Switzerland, now embody Monderman’s principles. 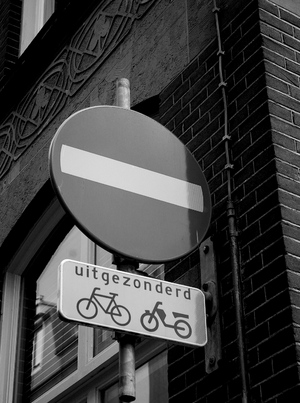 6.) Let prices tell the truth. Donald Shoup, an economist and the author of The High Cost of Free Parking says, “People who want to store their car shouldn’t store it on the most valuable land on the planet, for free.” Street parking is typically $4.50 per hour in European cities. Filling up a tank of gas in Japan will cost you about $7.25 per gallon, and gas prices in most European countries are also much higher than in the Northwest.

7.) You don’t need “bike clothes.” Most of the women and men I saw on bicycles throughout Europe and Japan didn’t wear special clothes. People just wore their usual outfits, heels and all.Women from London to Tokyo looked beautiful, stylish and feminine while they were cycling.Men frequently pedaled in suits.
“Style over speed,” says Mikael Colville-Anderson who started the Cycle Chic movement.

8.) Electrify it. A cargo bike with two kids and groceries (below) can be hard to get up hills.
That’s why many parents in hilly Zurich, Switzerland, use electric-assist bikes. They can also help people who are battling obesity or recovering from a heart attack. A bike shop owner I interviewed in Zurich makes custom electric-assist bicycles (below) for disabled customers who would otherwise be dependent on public transportation.

9. ) Admit it: It’s emotional. Smell and touch are the senses most linked to our emotions. In Europe and Japan, I spoke with dozens of urban cyclists who talked about the curious happiness derived from activating your senses and connecting with your city on a bicycle. One Amsterdam father’s voice actually cracked with emotion as he reflected on his morning and afternoon rides with his son. His toddler sat in a front-mounted childseat. The father talked about how nice it was to smell his son’s head during the commute to day care. Spending a fraction of the day exposed to the elements is refreshing for many people and the human-pace of cycling allows us to notice details about our community that we’d otherwise miss.

10.) It’s a virtuous circle - or cycle.  “Cycling isn’t just a part of the Dutch DNA,” Marc van Woudenberg told me in Amsterdam - where 47 percent of residents make at least one trip per day on a bicycle. The Dutch have the highest rates of utility cycling in the world because citizens have made it clear to politicians that cycling infrastructure is a priority. Better infrastructure recruits more people onto bikes, which creates more advocates for better infrastructure, which recruits more people onto bikes, and so on. Today, the Dutch continue to advocate for infrastructure that will facilitate cycling—like this secure bike parking facility at the train station in Groningen, Holland.

After six months on my bicycling wanderjahr, I’m inspired by all the creative ways cities are transforming themselves to meet the needs of the 21st century: low on carbon, high on physical activity, low on noise and danger, high on fun and style. Here in Cascadia, we have exciting opportunities to join the world’s great bike cities and redefine urban transportation on two wheels."

Christine M. Grant frequently wears heels when she cycles in Seattle. You can read more about the cycling cities she visited on her blog Shift. Alan Durning edited this post.