Foreign Minister Audronius Ažubalis of Lithuania expressed the wish that Nordic and Baltic cooperation could be developed by intensifying the flow of information between our countries, especially in the direction of citizens. It would be important to get more information about everyday life in other countries of the region, to support decision-making, Minister Ažubalis stated. Next autumn Lithuania will arrange a corresponding gathering of prime ministers and presidents and it is indeed important once again to reinforce the countries’ joint objectives.

The ministers also discussed increasing the placement of their diplomats throughout the world so that they could work together in one another’s diplomatic missions. Thus in countries where there is no diplomatic mission of one’s own country, citizens could be offered, for instance, visa services through a neighbour country’s diplomatic mission. The coverage of the diplomatic mission’s network could thus be arranged in cooperation between the Nordic and Baltic countries. This would also bring added benefits, such as better coverage, flexibility and cost-effectiveness. This will further strengthen the countries’ good relations, the ministers concluded in their joint statement.

This reinforced diplomatic cooperation coincides with the twentieth anniversary of Estonia, Latvia and Lithuania regaining their freedom and re-establishing diplomatic relations with other countries. "This memorandum of understanding signed by our eight countries is concrete evidence of our solidarity and our strengthened diplomatic cooperation," said the foreign ministers of the Nordic and Baltic countries in a joint statement. 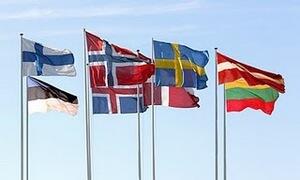