Kindly, I was collected at the airport by staff from the Lagos State Department of Urban and Regional Planning and driven in a minibus towards the city. As we clattered along the highway we soon reached the edge of the lagoon that separates the city from the Atlantic Ocean. Fishermen punted across the shallow waters, their measured movements contrasting with the bustle on the road. Their homes were built on rafts, with water for streets. However, the Janus face of this romantic image is that these houses, like so many more in the mega-city, are officially illegal, and lack basic facilities. Furthermore, significant parts of the city are below sea level, and the ocean is wearing away the beach. Climate change and sea level rise are real concerns.

Soon the traffic ground to a halt as we reached Lagos Island, the commercial core of West Africa. Street-wise hawkers strode between the stationary vehicles peddling their wares: newspapers, drinks, toys, cosmetics, books, detergents, the list seemed unlimited. The logjam city is their open-air emporium. However, they must dodge to escape injury from the other entrepreneurs making a living out of immobile cars, the motorbike taxis that are the best way to get quickly, if precariously, around the city. About 90 minutes after leaving the airport we reach the hotel on Victoria Island, an elite part of a city where the gap between rich and poor is far wider than in Scandinavia. The West African Regional Conference of the Commonwealth Association of Planners (CAP) begins the following day. I am Secretary-General of CAP, which is a body that brings together the professional planning institutes in Commonwealth countries. There are 53 countries in the Commonwealth, some of them very large like India or Canada, but many of them small island states in the Pacific or Caribbean, where there are not enough planners to create a national institute. The Nigerian Institute of Town Planners has about 2500 members and is our largest member in Africa. They host this regional event which is attended by representatives from Ghana (who have about 150 planners) and also Togo. Togo is not in the Commonwealth. It is part of French-speaking West Africa, though there is a sharing of some traditional pre-colonial languages with their Nigerian neighbours. It is hard to convey the depth of the friendship extended to me by everyone I met. The atmosphere in the meeting is something special, a uniquely African spirit of participation and enjoyment. It is a privilege to take part.
CAP and the Société Française des Urbanistes have been working with national organizations to help bridge the Anglophone / Francophone divide in West Africa. There are some intergovernmental structures in place: the Economic Community of West African States is clearly influenced by the way that the EU has developed, for example. An EU-style territorial development agenda with emphasis on key infrastructure links, balanced development and transnational co-operation, could boost regional wealth and cohesion. In this rapidly urbanizing region there is already strong unplanned growth in the increasingly congested corridor stretching 600 kms across four countries between Greater Ibadan, Lagos and Accra.
Over the two days of the conference there are some interesting presentations. We hear about the tensions in the oil-producing Delta area, where a few months ago, the government struck a deal with militant rebels to try to forge civil peace. There are several asides about how aspirations amongst better-off Nigerians are leading to less sustainable lifestyles. There is a paper on land tenure, explaining the complexities of land transfers in a system that is a mix of traditional, colonial and post-colonial (i.e. state-owned) land systems. There is an excursion to see a site in downtown Lagos where relocation of slum dwellers has been negotiated to facilitate development of a modern mixed-use complex behind jostling streets stacked high with the wares of traders, and where sellers and buyers glide by with basketfuls of goods amazingly balanced on their heads. Every available square meter of space is used intensively, so strong here are the agglomeration economies conferred by the city.
My journey back to the airport takes 3 hours. It is a tribute to the van driver that it is completed without a single collision. The traffic crawls, but it comes from all directions and in many different forms: a few centimetres of space are enough to induce instant occupation. Lane markings on the highway are merely decorative. Traffic police watch with disinterest occasionally going through the motions of organising the traffic flows. The basic problem, though, as a recent UK House of Commons Select Committee report noted, is that the infrastructure was designed for a city of 1 million people. 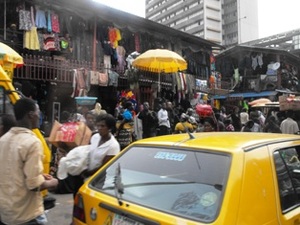 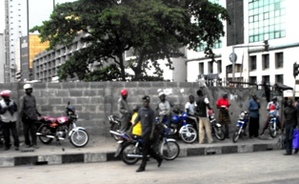 Nevertheless, the authorities have tried to reduce the chronic congestion. There is a bus priority lane on the highway, some linear landscaped strips and a new fleet of red single-decker buses to help people get around. Better traffic management would probably help, but there simply is not the physical capacity in the system to cope with the ever increasing volume of flows. A metro system would help, and a light rail system is planned.
Twenty-five years ago Nigeria shifted its capital city functions out of the congestion of Lagos to Abuja, a planned new town in the heart of the country. With over 70% of Nigeria’s industries, the situation in Lagos is now worse than it was a generation ago. What will it be like in another 25 years?
Copyright © 2007 Innovation Circle
Web levert av CustomPublish