"This project will be a good one!"

Young Eyes is a new IC project. It looks to me like it will be a good one. I was at the kick-off meeting in a cold and misty Warsaw in January. All the partners were there – Jelgava and Rauna from Latvia, our Polish friends from Suwalki, and from the far north came the delegation from Robertsfors in Sweden. In addition there was PAS from Edinburgh, bringing a lot of experience in youth involvement in built environment issues.

The project is funded through the ERASMUS+ programme. This means it is mainly about working with young people and helping them develop. This contrasts with some recent IC projects funded through INTERREG where regional development has been the prime focus.

What is YE trying to do?

During a workshop the partners were able to share and refine their hopes for the project. They agreed that YE would:

1. Provide the youths with a range of experiences.

2. Create international exchange of experience / learning from each other.

3. Show their home town to other young people: make them aware of it and how it looks through “Young Eyes”.

4. Help youths see how local activity can have an impact locally.

6. Show that international cooperation is an opportunity for development.

Although the project is mainly about the learning process for the young people, rather than a focus on place, all the partners recognise migration as a key issue to address. For rural and peripheral regions elsewhere Europe, the challenge is to hold on to young people once they leave school. When young adults migrate it not only reduces the population numbers, making it harder to sustain services, it also means that the population ages. A loss of people in the child bearing age groups generally means fewer babies being born, and so further ageing of the demographic profile.

Migration is therefore an issue close to home in the four municipalities involved in the project. It links well with the other themes in YE, which are governance, place identity and place attractiveness. In projects it is easy to come up with good ideas for the future of a town. However, a town that is losing population is going to struggle to sustain what it already has. Too often EU funds have provided money for new building and infrastructure projects, without adequately addressing running costs and economic sustainability. The austerity imposed on public spending across so much of Europe has made this disconnect worse.

I hope that the youngsters in YE will come to realise that migration is not just a local matter, acute as the local situation is for some partners. The free movement of labour is one of the basic principles of the EU. It goes to the heart of the idea of citizenship as it is one of the rights conferred by EU citizenship. This is what has driven large movements of people from one member state to another over the past decade. Equally the free movement of capital and services have helped the capital cities and mayor urban areas to attract people from the more rural regions.

One problem is that EU has not really addressed the implications of these rights. It was easy before the crisis began, because there was growth across Europe, and convergence between poorer and richer parts. That has now been set back. Austerity policies saved the biggest cities from a catastrophic collapse of their financial services industries, but at a cost that is being paid for by cuts in spending across all parts of a country. This has made it much more difficult to generate the jobs outside the cities to hold the population, and especially the young people who have been badly hit by the jobs crisis. Run this demography forward for a generation, and what will the population profiles of regions like eastern Latvia or southern Lithuania look like?

Last but not least there is a global dimension to migration. In particular the wars in the Middle East, which have their origins in European colonialism and more recent interventions, have triggered mass migrations of refugees. Faced by bombs and snipers at home, who would not want to move? What responsibility do European countries have for such migrants?

Of course, not all migration into EU is from refugees. There are many economic migrants willing to risk everything to reach London or Paris or Rome. They have been a component of the importation of cheap and flexible labour that has contributed to the growth of low wage service jobs in the big cities. What attracts them? How do they impact on place identity? Are they include or excluded by governance systems?

There is plenty there for the young people in YE to think about. 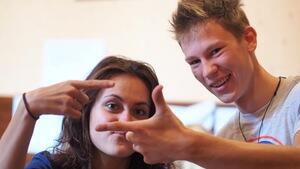