“There has never been this much Europe!”

After President Barack Obama’s State of the Union address on 12th February media all over the world spread his words, commented and discussed about what Obama said. Yesterday the German president, by the way his name is Joachim Gauck, hold a keynote speech on Europe’s future.

Besides a big applause on behalf of German journalist his words probably reached not half of the people in Europe compared to Obama’s. Of course, the role of the German president has by far not the same impact as the president of the United States but still I think it is worthwhile to give his speech some more attention. Not only because he discussed the European Idea but also because Gauck talked to us, he addressed all people in Europe: “In some member states, people are afraid they are the ones footing the bill in this crisis. In others, there is growing fear of facing ever harsher austerity and falling into poverty. For many ordinary people in Europe, the balance between giving and receiving, between debt and liability, responsibility and a place at the table no longer seems fair.”

In the rare televised speech on Friday in Schloss Bellevue in Berlin Gauck talked to about 200 guests. Diplomats, labor union members and politicians applauded his clear words. “Attractive though Europe is, the European Union leaves too many people feeling powerless and without a voice. (...) There is more to this crisis than its economic dimension. It is also a crisis of confidence in Europe as a political project.”

Addressing Great Britain, namely the people in England, Scotland, Wales and Northern Ireland, as well as new British citizens Gauck why they are important for Europe: “We need your experience as the oldest parliamentary democracy, we need your traditions, your pragmatism and your courage! (…) More Europe cannot mean a Europe without you!”

The president did not conceal his worry about his own country’s role in the Union. He is concerned, said Gauck, that Germany’s role in the European process is currently being regarded with scepticism and distrust in some countries. And therefore he assured all citizens of neighbouring countries that he cannot imagine any of Germany’s policymakers seeking to impose a German diktat - “More Europe does not mean a German Europe. For us, more Europe means a European Germany!”

Read the full speech on www.bundespraesident.de

Background
Joachim Gauck was born in Rostock, in the Communist East of Germany in 1940. He studied theology and worked as Lutheran pastor for many years. Joachim Gauck became involved in the opposition in the GDR at an early age. He was among the initiators of the church and popular resistance to the communist regime in the GDR and led the weekly prayers for peace which gave rise to the protest demonstrations. In March 1990, Joachim Gauck entered the first freely elected GDR parliament as a member of the Alliance 90 – an amalgamation of several grassroots movements – and was elected chairman of the special committee overseeing the dissolution of the Ministry of State Security. From 1991 to 2000 he was the Federal Commissioner for the Files of the State Security Service of the former German Democratic Republic and after that became the German member of the Management Board of the European Monitoring Centre on Racism and Xenophobia in Vienna. On 18 March 2012, Gauck was elected the eleventh President of the Federal Republic of Germany. 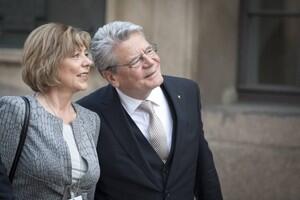