The Face of Climate Change

Climate change has many faces. A man in the Maldives worried about relocating his family as sea levels rise, a farmer in Kansas struggling to make ends meet as prolonged drought ravages the crops, a fisherman on the Niger River whose nets often come up empty, ...

... a child in New Jersey who lost her home to a super-storm, a woman in Bangladesh who can’t get fresh water due to more frequent flooding and cyclones...
Every year on April 22, more than one billion people take part in Earth Day. Across the globe, individuals, communities, organizations, and governments acknowledge the amazing planet we call home and take action to protect it.

The faces of climate change are by far not only human faces. They’re the polar bear in the melting arctic, the tiger in India’s threatened mangrove forests, the right whale in plankton-poor parts of the warming North Atlantic, the orangutan in Indonesian forests segmented by more frequent bushfires and droughts…

These faces of climate change are multiplying every day. For many, climate change can often seem remote and hazy – a vague and complex problem far off in the distance that our grandchildren may have to solve. But that’s only because they’re still fortunate enough to be insulated from its mounting consequences. Climate change has very real effects on people, animals, and the ecosystems and natural resources on which we all depend. Left unchecked, they’ll spread like wildfire.

Luckily, other faces of climate change are also multiplying every day. Every person who does his or her part to fix the problem is also a Face of Climate Change: the entrepreneurs who see opportunity in creating the new green economy, the activists who organize community action and awareness campaigns, the engineers who design the clean technology of the future, the public servants who fight for climate change laws and for mitigation efforts, the ordinary people who commit to living sustainably…

On April 22, 2013, more than one billion people around the world will take part in the 43rd anniversary of Earth Day. From Beijing to Cairo, Melbourne to London, Rio to Johannesburg, New Delhi to New York, communities everywhere will voice their concerns for the planet, and take action to protect it. Earth Day will harness that power to show the world The Face of Climate Change. And the acitivists will call on leaders to act boldly together in this pivotal year.

Between now and Earth Day, images of people, animals, and places directly affected or threatened by climate change – as well as images of people stepping up to do something about it will be collected and displayed. To help to tell the world the individuell stories climate reporters are needed. So, send your pictures and stories that show The Face of Climate Change.

On and around Earth Day, an interactive digital display of all the images will be shown at thousands of events around the world, including next to federal government buildings in countries that produce the most carbon pollution. The display will also be made available online to anyone who wants to view or show it. 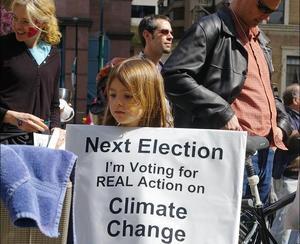