The Nordic/Baltic region is “the Silicon Valley of Europe” in terms of talents and investments. If these countries can ensure interoperability of their national e-service systems as front runners in e-governance and e-commerce, they will show Europe how ICT can stimulate growth.

These were some of the messages at a high level seminar on growth through ICT, organised in Brussels 23 January by BDF and Microsoft in cooperation with CEPS, Centre of European Policy Studies. Keynote speakers were Toomas Hendrik Ilves, President of Estonia, Rigmor Aasrud, Norwegian Minister of Government Administration and Brad Smith, Executive Vice President of Microsoft.
The aim of the seminar was to discuss the unique ICT position of the Nordic/Baltic countries and how we can utilise this potential, also in a broader European context. According to President Ilves, a European system of e-services is a long-term process that should be based on the unique experiences of the Nordic/Baltic countries: “First of all, Estonia, Finland, Sweden and Denmark should ensure the compatibility of their national e-service systems. From this platform, we could advance to co-operation between the Baltic Sea countries and then set a good example for the rest of the European Union”.

Rigmor Aasrud emphasized the importance of the ICT sector as a main driver of the service economy. However, the full effect depends on development of ICT skills and entrepreneurial skills. Also open public data offers new opportunities as a source for growth of public services and content. This will be included in the upcoming Digital Agenda for Norway. From a global perspective, Microsofts see the Nordic/Baltic region as one of the world leading ICT clusters, comparable to clusters in India, China and the US, according to Brad Smith. Since 2000 the company has spent more in the Baltic Sea Region than in any other part of the world, “In fact we have spent almost as much in the Baltic Sea Region in terms of investments as we have in the US itself”. He is convinced that by sharing and adopting best practice among them the Baltic Sea countries can set an example for the world.

President Ilves suggested to make use of the EU Strategy for the Baltic Sea Region as a platform. He found that Baltic Development Forum would be an ideal place to discuss ICT issues between the Nordic-Baltic countries and in a public-private dialogue. He underlined that an integrated e-governance system between Denmark, Sweden, Finland and Estonia would not only be beneficial to the citizens but also open up new business opportunities.

During the discussion education/talents, digital trust and labor mobility/immigration were mentioned as key topics for governments to address in order to ripe the opportunities offered by the digital sector. Due to “paranoia about foreigners” it is a problem to recruit talents from outside EU, a growth barrier that must be dealt with.

BDF was represented by Director Hans Brask, who also concluded the seminar, and by Head of Public Affairs Torben Aaberg.

A follow up conference will be organized 15 April in Stockholm, by BDF, Microsoft and City of Stockholm. A first call and programme will soon be available on this website.

Picture: The sky above the old town of Riga © Axiraa via Flickr 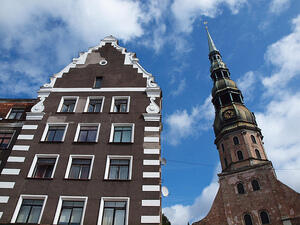