The final press conference immediately following the Grand Final performance had difficulties getting started, as journalists and delegations broke into cheers and photographers clamored for photographs of the victorious duo.

“Sorry guys. The only thing we want to say right now is we love you very much. Thank you very much, Dusseldorf. Thank you, Europe”, said Eldar. Nikki added: It's unbelievable - such a great feeling! Our dream came true!”

Eldar then interrupted the conference to sing a traditional Azerbaijani song with his delegation and Azerbaijani journalists in the audience. The duo was asked if they knew what their winning secret was. Eldar and Nikki gave thanks to God, their deceased grandparents, and their parents. Eldar: “I think we are going to cry at home. (…) if you wish you just have to believe and everything will come true. This is the truth. You know we had our national final on the 15th November and now it's the 14th May and I believed from the first day that we would get it. Thank you very much for everything - we love you very much.”

The singers also expressed thanks to their fans in Azerbaijan, who of course could not vote for them, but who supported them all the way. Asked about the unifying power of music for Europe, Eldar responded: “The culture makes people come together. This is the main thing.”

The Head of Delegation thanked the EBU and NDR “for organizing the best show I've ever seen on European TV.” 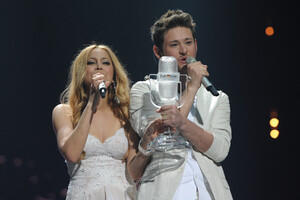