Estonia has joined the euro zone on the 1st of January 2011, with Prime Minister Andrus Ansip becoming the first person in the country to withdraw euros from a cash machine. The Baltic state is now the 17th member of the Euro zone. It has begun the switchover from its former currency, the kroon.

Official celebrations have been held in the capital, Tallinn. Adoption of the euro is a tangible sign of Estonia’s successful transition from a former Soviet state, which regained its independence in 1991.

Estonia’s public finances are in good shape - country recorded a budget deficit of 1.7% of GDP last year, well under the EU’s 3% limit. Government debt was also low– just 7.2% of GDP. The economy is highly flexible and, while not immune to the crisis, has shown its ability to operate and adjust under a fixed exchange rate for close to two decades.

With 1.2 million people, Estonia will bring the euro population to 330 million. Other recent additions include Slovakia in 2009, Cyprus and Malta in 2008 and Slovenia in 2007.

The prime ministers of neighbouring Latvia and Lithuania were also in Tallinn, watching events closely. But experts think the financial crisis means it will take some time before any other countries consider joining the euro zone.

As well as a new currency, Tallinn has something else to celebrate. Along with Turku in Finland, it is the 2011 European Capital of Culture. 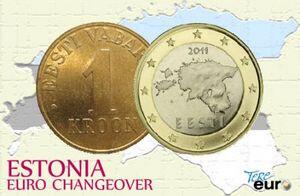