Stockholm and Hamburg are the first cities to claim the title. The Swedish capital will be European Green Capital in 2010, while Hamburg will take over the reins in 2011. Another popular prize - the European mobility week award - went to Budapest for its efforts during mobility week to raise public awareness of air pollution from traffic and promote cleaner alternatives.

Stockholm was among eight finalists, which also included Amsterdam. Bristol, Copenhagen, Freiburg, Hamburg, Münster and Oslo. The city has the the ambitious target of saying goodbye to fossils by 2050. Stocholm city is a part of the larger Mälar valley hwere about 3 million poeple are living. The area is growing very fast and the the city of Stocholm has declared itself as the "Capital of Scandinavia". Well, winning over Oslo and Copenhagen tit can for sure claim also to be the green capital of Scandinavia as well as for Europe.

'The Venice of The North' is a term often used about the Swedish capital Stockholm, beautifully situated on the Baltic coast. Ten per cent of the city area is water, and the many lakes and water sheds are highly valued for recreational purposes. In fact, 95% of the population live only 300 m away from green areas, thus augmenting recreation, swimming, boating, better well being, water purification, noise reduction, enhancement of biodiversity and ecology.

Read more about the winner.

Eight finalists
Follow the links below for more details about the finalists and their efforts to achieve a greener urban environment in their cities: 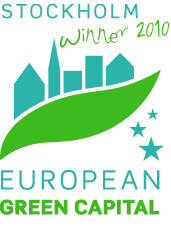