A new book argues that America's Rust Belt cities could play a central role in a greener, low-carbon, relocalized future. Small cities offer many assets for sustainable living not shared by their big city or small town counterparts: population density, nearby farmland, and manufacturing infrastructure and workforce skills that can be repurposed for the production of renewable-energy technology.

"America’s once-vibrant small-to-midsize cities--Syracuse, Worcester, Akron, Flint, Rockford, and others--increasingly resemble urban wastelands. Gutted by deindustrialization, outsourcing, and middle-class flight, disproportionately devastated by metro freeway systems that laid waste to the urban fabric and displaced the working poor, and struggling with pockets of poverty reminiscent of postcolonial squalor, small industrial cities--as a class--have become invisible to a public distracted by the Wall Street (big city) versus Main Street (small town) matchup. These cities would seem to be part of America’s past, not its future. And yet, journalist and historian Catherine Tumber argues in this provocative book, America’s gritty Rust Belt cities could play a central role in a greener, low-carbon, relocalized future.

As we wean ourselves from fossil fuels and realize the environmental costs of suburban sprawl, we will see that small cities offer many assets for sustainable living not shared by their big city or small town counterparts: population density (and the capacity for more); fertile, nearby farmland available for local agriculture, windmills, and solar farms; and manufacturing infrastructure and workforce skill that can be repurposed for the production of renewable-energy technology.

Tumber, who has spent much of her life in Rust Belt cities, traveled to twenty-five cities in the Northeast and Midwest--from Buffalo to Peoria to Detroit to Rochester--interviewing planners, city officials, and activists, and weaving their stories into this exploration of small-scale urbanism. Smaller cities can be a critical part of a sustainable future and a productive green economy. Small, Gritty, and Green will help us develop the moral and political imagination we need to realize this."

Catherine Tumber, a journalist and historian, is the author of American Feminism and the Birth of New Age Spirituality: Searching for the Higher Self, 1875–1915. She is a Research Affiliate in the Community Innovators Lab in MIT’s Department of Urban Studies and Planning. 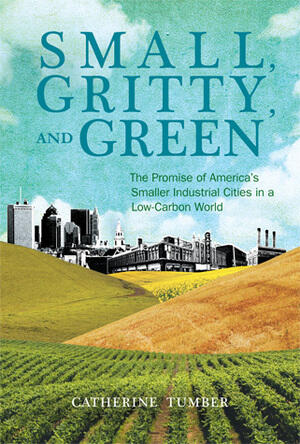