News agencies, magazines, TV and radio stations around the world focus on one topic today: The victory U.S. President Obama who is elected now for another four years. The Democrats also defend their majority in the U.S. Senate, the Republicans win the House of Representatives, which they have held since 2007.

What a triumph for Barack Obama, the U.S. president surprisingly won clearly against his Republican challenger Mitt Romney and will rule the country for another four years. Obama secured the necessary majority of 270 of the 538 electoral votes by winning the votes in the crucial key states. When he had won Ohio with 18 electoral votes, the race was over.

We're all in this together. That's how we campaigned, and that's who we are. Thank you. –bo, tweeted the new and old president Barack Obama.

“Obama Coalition” Carries Him to Big Victory, writes John Cassidy from the New Yorker and Rupert Murdoch’s U.K. tabloid The Sun headlines “Barack Four More. Obama is U.S. president again - after an election nailbiter.”
“Voters returned President Obama to the White House, but he will face a Congress with the same divisions that marked his first term”, warn the New York Times journalists Jeff Zeleny and Jim Rutenberg. 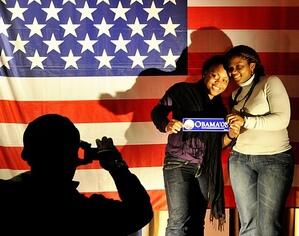