The eyes of the world are on Scotland this week. The referendum on Scottish independence looks like it will produce a close result. It’s been a long campaign, which the rest of the United Kingdom has largely ignored until the last couple of weeks when suddenly the gap between “yes” and “no” in the opinion polls has narrowed.

How did we get here?

The Scottish Parliament voted in 1707 to merge with the English one. The legitimacy of this decision has been widely contested by Scottish nationalists. The Parliament was not a democratic one and there were concerns about bribes and favours for votes.

The Scottish National Party (SNP) was founded in 1934, but made little electoral impact until the late 1960s when it won a famous by-election and went on to have a small representation in the UK parliament in the 1970s. However, the backdrop to this improvement in its fortunes was the discovery of oil in the North Sea. This transformed the prospects for Scotland’s economy, which up to that point had been over-reliant on traditional heavy industries that were in decline. Oil pointed to a future quite different from one of economic dependency.

However, the main political beneficiary of the oil was the UK government led by Margaret Thatcher. Oil pushed up the value of the Pound against other currencies, thus compounding the problems faced by manufacturing industries because the price of their products was increased in international markets. Oil revenues also helped the UK government to deliver tax cuts and to absorb the costs of a large increase in unemployment (and consequent weakening of the bargaining power of unions).

During this period, Mrs Thatcher and her party became more and more unpopular in Scotland. In part this was a consequence of a referendum held in 1979 on whether Scotland should have its own devolved Assembly, able to take decisions on important domestic policy areas like education. A majority had voted for the Assembly, but rules had been set to require more than that, and the incoming Conservative government shunned the calls for more powers to Scotland.

The unpopularity of the Conservatives increased still more with “Poll Tax”. This was introduced in Scotland by the UK government because Labour controlled much of Scotland’s local government, and Conservatives believed that people voted for spending on public services because many of the voters did not have to pay much for them in local property taxes. A broad based campaign within Scotland led to the Poll Tax being withdrawn, but not before many poorer Scots had taken themselves off the electoral register to avoid being forced to pay.

The Tony Blair government created a new referendum on a Scottish Assembly in 1997, after a long running and widely supported campaign by civil society as well as non-Conservative politicians. The result was an overwhelming “yes” and the Parliament was elected in 1999. However, it has no power over UK economic and monetary policy, military policy or social security.

In 2011 the SNP won an absolute majority in the Scottish Parliament and committed to a referendum on independence. The UK government agreed to respect the result. The question, chosen by the SNP, asks whether Scotland should be an independent country.

As well as the SNP, the Green Party is campaigning for a “yes” vote, as are some small left groups. The Yes campaign argues that in the end the issue is about democracy: let’s govern ourselves. Would it work? Scotland’s GDP per capita is higher than that of the UK as a whole (though not by much). Crucially, there is the oil. How much remains and what can be extracted by what technology, and what the market price will be, are all unknowns and disputed. However, oil is clearly a significant resource, and the Norwegian example of having used 40 years of exploitation to build up a sovereign fund is much admired and envied. In addition Scotland has good potential for onshore wind power (though wind farms are controversial because of their impacts on landscapes), and also for tidal and wave power.

Another main line of argument is that an independent Scotland would be a fairer and more equal country than the UK. Harsh measures have been introduced by the UK government that have hot some of the poorest people and seen the growth of food banks. This was done as part of an austerity programme, but seemingly with no thought of how it might influence the Scottish referendum.

Nuclear weapons are another point of departure. The SNP says Scotland would become nuclear-free. More generally it would not launch illegal wars such as the invasion of Iraq in 2003.

The “No” campaign calls itself “better Together. It is supported by the Conservative party, the Liberal-Democrats (coalition partners in the UK government) and the Labour party, as well as by the United Kingdom Independence Party (who the other three have kept some distance from). The campaign has been almost entirely fronted by the Labour party. The UK Prime Minister, David Cameron, refused numerous invitations to have TV debate with the Scottish First Minister, Alex Salmond.

The “No” campaign has warned through out that independence would be an economic disaster for Scotland, and would break ties of family and community that currently are not divided by an international border. In particular, they point out that Scotland’s renewable energy industry is significantly funded through surcharges on energy users across the UK, 90% of whom will be in a different country after a “yes” vote.

As the gap between the sides has narrowed in the opinion poles, Better Together has also argued that by being one country we are able to pool resources to better help those in need.

The main argument deployed by Better Together, but contested by the SNP, is that Scotland would not be allowed to continue to use the Pound Sterling as its currency. With England the main export market, this would increase transaction costs for Scottish business and create a loss of confidence in the currency markets.

The SNP say this is bluff, and that they would share the Pound. However, the counter argument is that short of the existing full political and economic union, a shared currency would mean that interest and exchange rates for Scotland would effectively be set by the Bank of England. What kind of independence is that?

As well as the currency question, many other issues would need to be negotiated if there is a Yes vote on Thursday. One of them is membership of the European Union. “Yes” says it should not be a problem: Scotland has been a member (as part of the UK) for 40 years and already has enacted all necessary legislation. “No” says the new country would need to start again at the beginning with an application to join the EU that Spain, worried about the precedent for Catalonia and the Basque country, would veto.

However, the Conservatives are committed to holding an “in or out?” referendum on the EU in 2017 if they are the UK government. Might staying in the UK mean being voted out of EU by supporters of the Conservatives and UKIP in the south?

The result looks likely to be close. The “No” campaign were comfortably ahead for months and months but the gap has narrowed in recent weeks and there have been clear signs of concern (or panic) over the past week.

Voting is restricted to people 16 and over and living in Scotland. One interesting aspect is that many people not previously registered to vote have been registering, mainly following campaigns at grass roots level by Yes supporters. The Poll Tax, the “first past the post” electoral system used to elect members to the UK parliament, and a feeling that the Conservative, Liberal Democrats and Labour all share broadly neo-Liberal policies have resulted in a situation where substantial numbers of people, especially in poorer neighbourhoods had given up on conventional politics. They may now see a “Yes” as the ultimate protest vote. 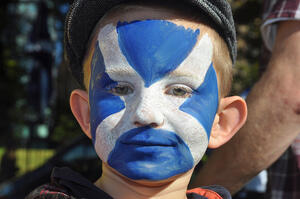