Scandinavia on the move

The Scandinavian Borderland report is now delivered. It is strongly focusing on climate and railways. However, a more comprehensive regional strategy is proposed, which includes the better connectivity within the greater Oslo region, across the Oslofjord and across the border between Norway and Sweden. Ultimately it is addressing the need for green mobility, to speed up the shift from CO2 polluting air and road traffic towards more climate friendly transportation.

The Central Scandinavian Borderland is one out of five pilot cases within the TENTacle project. The report can be downloaded here: TENTACLE report, v 5.pdf

The proposed strategy will be tabled to the Värmland-Østfold Border Council, in May 2019. It focuses on the region between the Oslofjord and the Vänern lake in the east, Hedmark county in the north and Bohuslän/Gothenburg in the south. The border region is within the Nordic Triangle, between the capital cities.

The report describes the opportunities for establishing more efficient and climate friendly transportation across the borders. Today most of the transport goes on roads and by air traffic. The report is exploring how millions of air flights can be shifted to high speed railways and how more cargo can be shifted to conventional railways.

TENTacle project organized its´ final conference in Brussels 6th March, together with other projects. Present at this conference were EU parliamentarians, national and regional decision makers, experts, project workers and others.

Read more about the conference here

EU representatives and others focused on the climate change and the job we all have to do in order to combat the global warming and CO2 emissions from the transport sector. EU will take a leading role in this work, according to President Juncker. At the same time there is a strong engagement from young people in Europe demanding more proactive actions, initiated by a Swedish teenager.

This report is an answer to some of the challenges and is showing how millions of flights can be shifted to rails by the establishment of high-speed railways. The good news is, that an efficient high-speed network will take a huge part of the transport market and because of that, it will not need state funding. On the contrary, with state funding to lean on, it will certainly be established in a more suboptimal way, with many political considerations and delays. That will be a great loss for the environment and for the tax payers.

This report is also focusing on conventional railways and the need of upgrading, and investmenst in some new missing links. Some of the elements in the proposed strategy are the following: 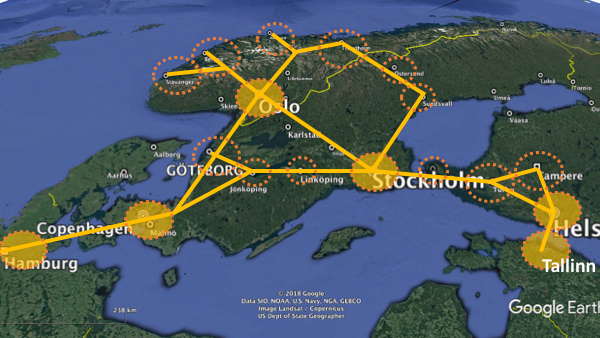