What can we expect from the global climate summit?

The Euro crisis kept the continent busy for the last months and cut out other urgent issues. With the start of the climate summit in Durban / South Africa on Monday the awareness on climate change reawakened but expectations are nominal. Is it already too late?

In keeping with the motto “Saving tomorrow today” negotiators and ministers from nearly 200 countries meet in Durban / South Africa from 29th November to 9th December to discuss a reduction regime for carbon dioxide emissions and to keep the tenets of the Kyoto Protocol alive. “But the time to save the Kyoto Protocol is running out. The protocol is aimed at cutting the greenhouse gas emissions scientists blame for rising sea levels, intense storms, drought and crop failures”, writes Reuters news agency.

More optimistic is Germany’s Environment Minister Norbert Röttgen. In an interview with the news magazine SPIEGEL he said: “It is still not too late. We still haven't reached the point of no return, where climate change can no longer be stopped. There is a chance that we can limit the extent of climate change.”

A decisive role is played by the big emitters: the United States, China and India. According to Röttgen the USA, China and India are responsible for the disappointing results of global climate policy: “The political situation in the US prevents the enactment of federal climate legislation and US President Barack Obama has no domestic political mandate for climate protection. China is doing a good deal on the domestic front, but for political reasons is hesitating to make international commitments -- and India is afraid of curbing its economic growth if it commits to CO2 reductions.”

In her Blog “350 or bust” Canadian Chritine Pollo puts down her thoughts about “the annual round of global climate talks: “I wish I was feeling more optimistic about the possibility of elected politicians to come to an agreement that would preserve an admittedly changed, but still relatively stable climate, for future generations. As the IEA reminded us recently, we have five years left. If nothing changes by 2017, if we don’t revolutionize energy systems, if countries can’t agree on a global climate deal, global warming will breach the 2 degrees Celsius barrier and we will be locked into runaway climate change.”

“We are dealing with a systemic crisis. Our lifestyle of the past few decades has revolved around a dangerous egotism, which only focuses on our present needs, and which we now have to overcome”, states Röttgen.

The bottom line is that: While a few nations continue to The world is watching what is happening in Durban with little confidence, moaning about on how few decisions the decision makers agree on. While complaining we should use our time to think about what we can do? Here are 10 ways to reduce your CO2 emissions footprint. 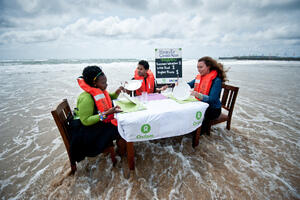