Russia and Ukraine will solve problems

Putin and Yanukovich met in Crimea

Russian Prime Minister Vladimir Putin said on Saturday that he was sure that Russia and Ukraine would be able to solve all economic problems in bilateral relations despite the fact that the two countries had plenty of them. All according Itar Tass. “The trade turnover has reached its pre-crisis levels but we still have many problems,” the Russian prime minister said summing up the results of his brief talks with Ukrainian President Viktor Yanukovich.
Photo: RIA Novosti

Russia and Ukraine building stronger relations
At the meeting which took place at Foros Putin continued to say that “We spoke about problems in our relations in the energy sector, about the development of pipeline transport and the gas transportation system in Ukraine and discussed the possibility of Russia’s participation in various project,” Putin went on to say. However, he added that those subjects were still “raw”.

The Russian Black Sea fleet was not the subject of the talks in Foros. The only thing Putin said with regards to it was that Russian State Duma Speaker Boris Gryzlov would go to Sevastopol on Sunday to attend the celebrations of the Russian Navy Day, following orders from the president of Russia.

Putin said that one of the purposes of his brief visit to Ukraine was to personally greet Viktor Yanukovich on his birthday. According Voice of Russia they also spoke about growing bilateral ties in aircraft-manufacturing and space exploration and spoke of progress in a joint project to launch the ANTONOV-70 cargo plane.

He also supported the decision of the Ukrainian and Russian leaderships to resume work on the project of a bridge across the Kerch Strait.“This is a tremendously profitable project. It will reduce the route from London to India by a thousand kilometres and boost the development of the eastern part of the Crimea,” Luzhkov said. 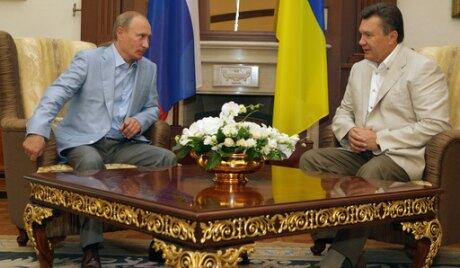