Downpatrick is a town in Country Down in Nothern Ireland with more than 10 000 inhabitants, about 33 km south of Belfast. The town has strong connections to Saint Patrick, who was buried there in year 461 within the grounds of Down Cathedral. His grave is still a place of pilgrimage on St. Patrick's Day (17th March each year).

During the visit Jelgava district representatives attended a recent educational establishment – Black Water Integrated College, which was opened in September 2008, merging two schools and exploiting an integrated approch – Catholic and Protestant children learning together and respecting each other’s believes and opinions. The school consists of 330 children of age 11-16 years. It was also discussed with the school principal about the common activities and exchange projects involving shools from Jelgava district. 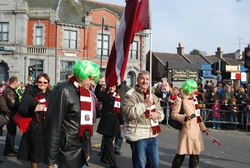 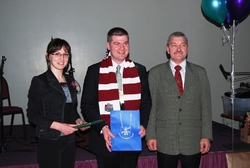 It was a very good experience to visit the Patrician Youth Centre located in the town. It is a full-time voluntary youth centre, established in 1981 to offer alternative leisure time activities for local youth. The centre provides a wide curriculum of social, educational, spiritual and recreational activities to all the youth of the area, aged eight to twenty-five years. Some of the centre programme elements include arts and crafts, music, dance, drama, health education, training programmes, international travel and exchange, as well as sporting activities. The youth centre is cross community at all levels and is actively involved in Community Relations Programmes, having ongoing linkages with other youth organizations and schools. The centre is a good example on how to organize youth activities and could be a good partner for youth exchange programmes.

The most exciting experience was the annual St. Patrick’s Day Carnival Parade - it was a great honour for Jelgava district delegation to participate in the parade with over 2 000 participants and 10 000 spectators. Also other twinning cities and regions were present in this event - Listowel (Ireland), Szekszard (Hungary), Arges Region (Romania), Valenca (Portugal), Bezons (France), Chiari (Italy).

Since March 18th, 2008 when the twinning agreement between Jelgava District Council and Down District Council was signed, several common actions have taken place to encourage the development of both districts, as well as other parts of Europe. Experts of Jelgava District Council together with partners from Downpatrick will provide trainings for decision makers and specialists of Cahul region in Moldova within the project “Capacity strengthening and awareness rising in Cahul region, Moldova” financed by the European Commission Europe Aid programme.