Regions and Cities ready for the European year 2013

Forum of the Committee of the Regions

The forum will take stock of the impact of EU citizenship on local and regional policy making. CoR members will then adopt an opinion on the Common Strategic Framework for cohesion policy after 2014. MEP Lambert van Nistelrooij, co-rapporteur on the same issue for the European Parliament, will also take part in the debate. Other relevant topics related to the future cohesion policy will also be discussed based on the opinions on the European Community led local development and on the proposed European Code of Conduct on Partnership.

On the basis of the opinion drafted by Alain Hutchinson (BE/PES), the controversial issue of the protection of workers temporarily posted abroad will also be among the main topics of debate. The opinion proposes a series of amendments to the European Commission's proposal to make sure that EU legislation offers appropriate social security and labour protection to posted workers.

Environmental issues will also heavily feature during the plenary discussions with four opinions up for adoption. Nilgun Canver (UK/PES) will present her opinion on the proposed 7th Environment Action Programme, which defines objectives for environmental policy and looks to improve implementation in Europe, thus supporting the Europe2020 objectives. Urve Erikson (EE/EA), Member of Tudulinna Municipality Council, will also present her opinion on "Priority substances in the field of water policy" on the second day of the plenary, following which Corrie McChord (UK/PES), Member of Stirling Council, will present for discussion his opinion on "The implementation of the Soil Thematic Strategy" for debate. On the same day the CoR recommendations as regards the EU Strategy towards a sustainable bioeconomy will also be put to vote.

The Plenary session will be held in the premises of the European Parliament on 29-30 November in Brussels. Through plenary debates and parallel workshops on the main topics of the citizenship theme, politicians, experts and practitioners will discuss how regions and cities can manage the effects of free movement and voting rights, and how they can stimulate the active involvement of EU citizens in their territory. The event will be accompanied by an exhibition and the presentation of an "EU Citizens Passport". About the European Year The European Commission has proposed to designate 2013 as the European Year of Citizens. This proposal will be adopted by the European Parliament and the Council in the coming weeks. It aims to raise awareness about EU citizens' rights and to engage with them in a debate on the development of EU citizenship and of Europe in general, in view also of the EP elections of 2014. The European Year 2013 is a key moment in the Commission's Citizens' Agenda which also includes the publication of the 2013 Citizenship Report and other actions to promote EU citizenship. Freedom of movement is the most tangible expression of the benefits related to Union citizenship: it allows citizens to work, study, shop, travel and live in any EU country. EU citizens should be able to enjoy this right without being confronted to unnecessary obstacles or administrative burden. The rights granted to Union citizens to vote and to stand as candidates in elections to the European Parliament and in municipal elections in their Member State of residence provide citizens with the means to participate in the democratic life of the EU, whilst at the same time contributing to their integration into the society of the Member States of residence. In this field, the Committee of the Regions is currently drafting an own-initiative opinion, with the working title "Strengthening EU Citizenship: Promotion of EU citizens' electoral rights". 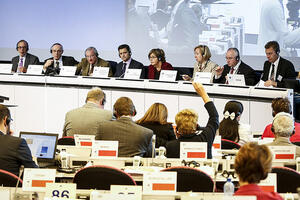