Three late summer weekends; three very different parts of Britain. Edinburgh in August is the Festival City. The Edinburgh International Festival began back in 1947 and so far has survived recessions and changes of fashion in grand style. The city fills up for four weeks with tourists from all over the globe who come for the culture. You sit by them on the bus while they fumble their maps and peer out of the window to check where they are. Baseball-capped American pensioners negotiate with the bus driver to see whether this bus will take them to Rosslyn Chapel, a huge draw since featuring in the best selling Da Vinci Code.

I guess that just riding on a bus is itself an experience of some of these trans-Atlantic visitors.   However, it is mainly young people from England who fill the city at this time and they are here to see the stand-up comedians.</p>

Thus it was that I found myself on the city’s streets at gone midnight on a Saturday night / Sunday morning, literally jostling with the crowds well past my normal bed time. Two of my daughters were here “doing the Festival” and they took me along to see Mark Watson, a 30-year-old comedian from the south of England perform his late-night routine to a packed Church of Scotland Assembly Room. I suspect that generations of Ministers of the Kirk still turn in their graves at the thought of people gathering in this building to have fun until the early hours of the Sabbath.

Mark Watson’s show mainly focused around jokes at the expense of late comers and telling of how members of the public recognise him because he had done a TV advert a few years ago. It was entertaining enough, but I had been living in a time warp. I assumed stand-up comedians were more politically engaged than this, and that there would be a more social and bitter edge to the commentary than simply the recounting of his own fame and interests. The UK government, led by people of huge wealth, enthusiastically is planning to cut public spending by 25%, has stopped new school re-building in England and is targeting the state benefits of people who have been medically certified as unable to work. It says that “We are all in this together”. (In case non-UK readers believe that I made up the quote to exaggerate their stance, no, that is actually the mantra used to support the actions). I would have thought there was ample scope for satire just in that alone. Are we now at the point where even comedians need to protect their market share by not offending the comfortable and the affluent?

Pretty villages and stately homes The next weekend was spent on holiday in the south of England. Although I travel to London frequently, by train or by air, driving through rural southern England was still something of an eye-opener for me. It is so pretty! Once you are off the main road there are so many idyllic-looking villages, complete with thatched roof cottages and hanging baskets full of flowers. There are also modern executive houses (in traditional styles to satisfy planning controls) set back behind grassy lawns and with expensive cars outside. From the East Anglian coast in the east across to the Cotswolds in the west and over the Downs to Dorset and the south coast, the vernacular building styles and materials differ. However over this swathe of the rural south there is the unmistakable sense of self-enclosed comfort. Even the farm fields looked rich.

Being on holiday you also realise just how plentiful are stately homes in this part of the country. Many are set in a sumptuous landscape setting and represent to continuity of the consumption of countryside from the eighteenth century to the present. This contrasts with the traditional view of rural areas as defined by production through farming and forestry, and inhabited mainly by low income people.

The urban North In these landscapes of affluence, it is almost impossible to imagine that the industrial cities of the North of England and Central Scotland even exist. You feel that the day visitors filing through the elegant drawing rooms of the grand mansions of the gentry have never, ever set foot on the multi-ethnic streets of Birmingham or Manchester. London may exist in their consciousness as the natural focus of national economic life, and it may even be the workplace for some. However, from here even London feels like an aberration, quite disconnected from the fields, hedges, flowers and woods and the shallow streams on which ducks dapple by the village green.

The third weekend is in inner Manchester for a family birthday party. The townscape remains definitively that of the industrial revolution. Terraces of small houses that once housed those who earned a living in the nearby mills or factories remain. There are still mill chimneys on the skyline but beneath them is only cheap, often empty floor space. Small shops, shuttered up in the evenings, struggle to survive, though there are new shopping malls that the cars flock to. A fence round a gap site has a sign promising “A future regeneration site”. With land and property markets always weak in areas like this, and the added effects of the difficult economic times and the government’s promise to cut back its spending, that future may be some way off. The people we meet here who work all work in the public sector and have tales to tell of new announcements of closures of facilities, staff cuts that put intolerable pressure on those able to keep their jobs, illnesses that keep them off work. In Glasgow, the hotel managed by our daughter advertises a job at the national minimum wage and within 36 hours has over 200 applicants.

Territorial Cohesion The EU ideal of territorial cohesion remains an ambiguous concept that is still subject to contested interpretations. The period from now until the decisions on the future of the Cohesion Funds post-2013 will doubtless see much manoeuvring by regions, national governments and the European Commission. Increasingly the EU has spoken of cohesion as a form of strength through diversity. Rightly, any notion that policy should seek to make all areas the same has been rejected. Instead the idea is that each area plays to its special strengths: in its unique territorial assets lies the scope for specialisation and competitive advantage.

However, to me the idea of territorial cohesion has always carried also a sense of a shared identity and legitimacy for the political units. People from disparate regions may indeed have different types of jobs and inhabit different cultural landscapes and have different income levels and access to public services, but (and it is a big ‘but’) the differences are not so wide or problematic as to erode the legitimacy of the political unit that encompasses them. In crude, perhaps rather British, terms, there remains a sense of “fair play”. Or to put it another way, a feeling that “We are all in this together”.

Inevitably there is an issue of scale involved in the idea of territorial cohesion. Cohesion may exist (or be constructed or undermined) at the level of the EU, at a macro-regional level such as the Baltic Sea Region, at national, regional or local level. My three weekends suggest that there is territorial cohesion at regional level within the UK, but much less at national or local level. 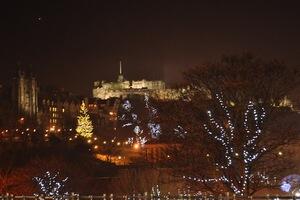