Rail Baltica Growth Corridor is a project working towards improving the accessibility in the Eastern part of the Baltic Sea Region. It is linked to the wider concept of Rail Baltica – a railway that will connect the Eastern Baltic Sea Region from north to south branching from St. Petersburg, Helsinki, Tallinn, Riga, Kaunas and Warsaw to Berlin. The Region gains new economic potential as the major business hubs will be connected with North-West Russia and the EU core.

The project will create a cooperation platform for observing the needs of both transport sector and customers in line with the green growth corridor principles. Rail Baltica Growth Corridor aims to form an institutional platform in Baltic Sea Region for the joint development and cooperative activities of public and private stakeholders acting for the improvement of the Rail Baltica railway line. RBGC invites cities, regions, transport sector, and ministries to build a common action plan to gain momentum to the introduction of a truly transnational, customer-friendly, effective and sustainable Rail Baltica connection.

Project is supposed to contribute to development of sustainable modes of transportation, improved balance and interoperability between different means of transportation and the establishment of links with the rest of the EU rail network.

Economic integration of Baltic States and Poland with Western Europe leads to growing trade and traffic. Well furnished and sustainable transportation links therefore promote economic growth and integration. While cross-sea ferry traffic in the Baltic Sea Region is growing fast, coast-parallel transport on sea or rail stagnate in contrast to rapidly growing road transport. Passenger railway services from Tallinn to Central/Western Europe ceased. Via Baltica, road and rail, is a priority in the TEN networks, with only road improvements progressing to date. Railway investments concentrate on East-West corridors and neglect the wanted integration within the widened EU.

On 20th-21st September 2001 the project „Rail Baltica” idea was included in the list of the priority projects of spatial planning of the Wismar Declaration signed by the Ministers of the Baltic Sea States responsible for spatial planning development, that was analyzed and defined in the report „Spatial development action programme for Baltic Sea region” (VASAB 2010+).

On 1st October 2003 the project Rail Baltica was included in the list of the priority projects according to the proposal submitted to the European Council by the European Commission. Afterwards, the project was started to implemented. Let’s hope that once it has finished, transportation in the area will become better and close to perfect. 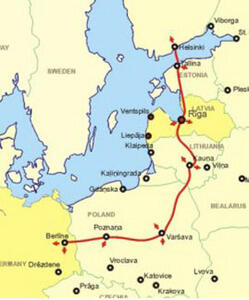