Protest in Latvia turns to violence

Tuesday evening (January 13) protest action against poverty was organized by opposition movement “Society for different politics” in Riga, the capital of Latvia. The meeting organized by 20 various organizations and politicians gathered more than 10 000 people all together. The protest meeting was officially organized and didn’t have any big misunderstandings; however after it around 1000 participants approached the Latvian Parliament where the demonstration became to be a fight.

Vandals were crashing Parliament building windows, hitting police cars, and throwing stones, bottles and others things to the officers. Some people even tried to break into the Parliament building, but the violence was stopped by special police forces. Criminals destroyed several buildings in the old town, broke into and robbed some shops, “Rigas balsams” store, crashed Parex bank windows.

According the Security Police the violance is disorganized and appeared spontaneously. One of the protest organizers Artis Pabriks condemned all the violence calling it „drunk vandals“ rage.

106 persons were arrested and 10 policemen injured.

Latvian citizens are unsatisfied with increasing unemployment, unpopular reforms, and are blaming their governance for economic recession. Not so long time ago Latvia‘s economy was one of the fastest growing in the EU. Now the things are going opposite direction and 5% drop is the prognosis for the coming year. 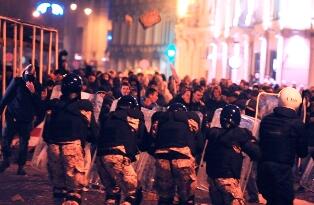