A new report developed by Deutsche Bahn International and Norsk Bane is analyzing the options for building high speed railways between the two fastest growing Scandinavian capitals. 1,2 million passengers per year are already flying between Oslo and Stockholm. In 2025 the number might increase to 1,5 million. A huge amount of flights compared to anywhere else in Europe. Now the EU transport strategy plans to triple the high speed networks in Europe before 2030.

Spain, France, Germany, Russia are way ahead of Scandinavian railroad authorities when it comes to planning and implementation of high speed networks. In US and Asia there are also bold plans for development of high speed railway networks. However, not one meter is yet decided to be built within Scandinavia. This is not acceptable according to many voices of the north and several initiatives are undertaken all over the Nordic territory to promote, analyze and plan for new high speed networks. A leading region in the world as Scandinavia wants to be, should not be lagging behind when it comes to transport infrastructure.

Speed matters obviously! Slow railroads can be nice for a relaxed holiday but it is not competitive for business travels and commuting. Trains should go significantly faster than cars and should beat the airtraffic in time from city center to city center. If not, it´s not worth while to invest a significant amount of money. Modernizing the slow railways with it´s many curves and old stations will never become the major carrier of persons and cargo. Trains should operate faster and safer than any other vehicles at distances which are medium long. A fast train brings you the 600 km between Barcelona and Madrid in 2 h 50 min. The Oslo-Stockholm distance is about 500 km, so the expected time is about 2,5 hour. Planes and cars will not be able to compete with that.

Road traffic is also growing rapidly along the E 18 including cargo trucks. Already 700 trucks are crossing the E18 border at Orje every day. For the regions between Oslo and Stockholm a new railroad will open many perspectives for regional development and a better integrated labor market across the border. 40 % of Swedens BNP is produced along the corridor. Smaller and medium sized cities will get a boost and become connected to the capitals and to each other fast and easy.

The border cooperation committee between Ostfold and Vaermland regions is actively engaged in the promotion of the idea about establishing a high speed railway between Oslo and Stockholm and regards this new connection as an outstanding possibility to strengthen the cooperation between Norway and Sweden. Trade, environment, culture, education, health and sport would all benefit from a faster, modern and more comfortable railway. The price tag for investments in a new double track railway with speed from 250-330km/h is estimated to about 2 billion euros only at the Norwegian side of the border.

The project may be the biggest cooperation between the 2 countries since the union of 1814. An in different from political unions the rather heavy railways have a tendency to stay for a long while and can be used by many generations. 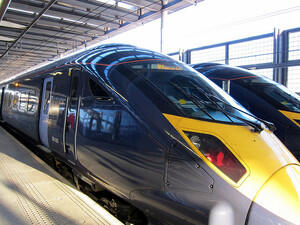