Danish filmmaker Susanne Bier succeeds in L.A. and takes home an Oscar for her film “In a better world”. The movie belongs to this year’s Academy winners besides the period drama “The Kings Speech” and the science-fiction spectacular “Inception”.

The lives of two Danish families cross each other, and an extraordinary but risky friendship comes into bud. Susanne Bier's film “In a better world” brings loneliness, frailty and sorrow onto the screen and convinced the Academy to be this year's best-foreign language film. A great success that proves Scandinavia’s potential for excellent movies.

Besides Susanne Bier Colin Firth (best actor), Natalie Portman (best actress), Christian Bale (best supporting actor) and Melissa Meo (best supporting actress) were the lucky ones on the stage of the 83rd Academy Awards ceremony on Sunday night. But there was no outstanding movie which outshines this year’s Oscars. “The Kings Speech” shares the thrown with “Inception”, a blockbuster about dream invaders.

After three hours and twelve minutes 24 little golden statues were passed on to their new owners. Colin Firth convinced the Academy as the stuttering King. The period drama about King George VI of Britain and his vocal coach, won four trophies - best picture, best actor, best director and best writing (original screenplay). Natalie Portman won the only Oscar for “Black Swan”. In contrast to her role as a demented ballerina Portman showed off her round belly on the red carpet.

The story about the found of Facebook, “The Social Network”, won the Oscar for best music (original score) and film editing as well as the award for the best adapted screenplay for Aaron Sorkin. “Alice in Wonderland”, “Toy Story 3” and “The Fighter” shared the third place in the movie ranking with winning two Oscars each. With his song “We belong together” (“Toy Story 3”), singer and songwriter Randy Newman received his second Academy trophy – it was the 20th nomination for him.

Foto: "In a better world" 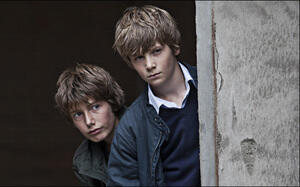