Perhaps the most extreme perpetrator in Europe in recent history. The actions are founded in a 1500 pages manifest published at the Internet. The terrorist wanted to hit the Government in Norway and Labour Party youths. The PM Jens Stoltenberg stated during the mourning ceremony Sunday that the answer to the terror is more humanity, more democracy, but never naivity.

Anders Behring Breivik managed to kill about 80 in his actions. Most of them shot down one by one. He claims to be in war and consequently doesn't accept any punishment by the rule of court. The murders were planned carefully during last nine years. According to his own published documents he regards himself as a crusader in a war against islam, marxism and "multiculturalism". The question is how well connected he is with other extremist groups in Europe, but he has been active at social networks and forums where he has expressed his opinions. He calls himself conservative and defender of christianity. People in Norway gathered Sunday in churches and city centers all over the country,lighted candles and put flowers at squares and outside churches. The incidents are still unbeliveable and the whole situation in the country is unreal. However, the warmth and solidarity among ordinary people, and between politicians in all parties is very strong. The King and his family has actively supported and comforted the families who lost their loved ones.

Norwegians also are very thankfull for the warm support from neighbour countries and the international community. 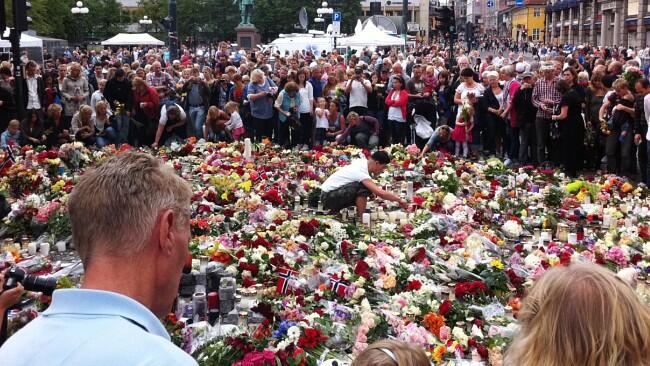