Norwegian Ministry of Oil and Energy launched 8th May a plan for drilling oil in the Barents Sea. It will take about 3 billion euro to get the oil field rigged and ready for production. The estimated value in the the Goliat oil field is about 7 billion euro with today prices(174 million oil barrels). The rights to exploitation are given to ENI Norge AS and StatoilHydro Petroleum AS.

The environmental organizations are not satisfied, even if the Ministry promises that the oil exploitation will follow the highest standards and zero oil pollution into the Barents Sea. Bellona Foundation has expressed great concern about the decision, also because the Government opens up for oilactivities around the Arctic a island Jan Mayen. The leader of Bellona, Fredrik Hauge calls it a scandal and promises to launch a campaign against the decision. Read more here. Organization Nature and Youth is also furious about the decision  Questions are raised how this fits in with Norway's international environmental obligations.

They're afraid that oil pollution could make utterly harm to the Arctic environment and wild life. The Government claims that the project will create 500 new jobs. The scepticists have been questioning how much the Finnmark region actually will gain as the plan is to make the production off shore and not to land the oil in Finnmark. However, the local and regional authorities are very happy about the decision and they hope for lots of economically spin offs from the Goliat field and first of all in Hammerfest city where the mayor in Hammerfest, Kristine Jørstad Bock,  according to Nordlys. Some other comments can be found here: 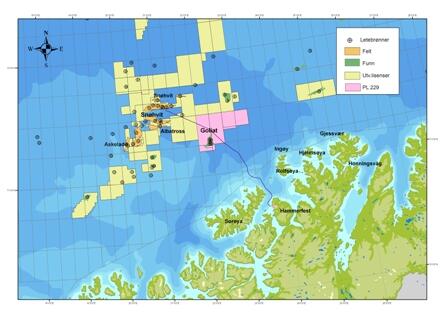