Norway on top for the fourth time in a row

The world's most prosperous nations 2011

For most people “prosperity” is not just about money but also about quality of life - an approach which is similar to the one of the annual index of global prosperity by the Legatum Institute. The Index defines prosperity as both wealth and wellbeing, and finds that the most prosperous nations in the world are not necessarily those that have only a high GDP, but are those that also have happy, healthy, and free citizens.

The 2011 Legatum Prosperity Index ranks nations on aspects such as the strength of the economy, education, personal freedom, governance and safety and security. The recently announced Index for 2011 show, that Norway remains at the top, narrowly ahead of Denmark and Australia, with the United States ranking 10th, ahead of large European nations such as Britain, Germany and France, which all still make the top 20. The Central African Republic ranks last ahead of Zimbabwe and Ethiopia.

Norway has now topped the survey for four years running, followed by Denmark in second. Australia has jumped one spot to third on the list, followed by New Zealand in fourth and Sweden in fifth.

China improved on economic indicators – moving ahead of the U.S. for the first time – and places 52nd overall. Another first in this year’s Index: several new EU members from Central and Eastern Europe – led by Slovenia, Czech Republic, and Poland – outperformed their most troubled western and southern neighbors on key indicators.

The Index assesses 110 countries (accounting for over 93% of the world’s population and 97% of the world’s GDP) and ranks them based on their performance in eight sub‐indices, including Economy, Governance, Personal Freedom, and Social Capital. “The Prosperity Index allows us to see the way nations perform on globally significant factors,” said Fareed Zakaria, host of CNN’s flagship international affairs program Fareed Zakaria GPS 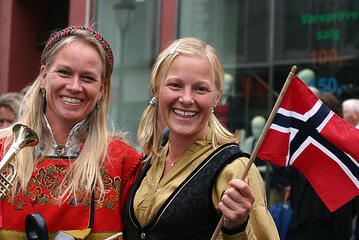