"We will punish the murder with more generousity, more tolerance and more democracy", stated Oslo's Mayor Mr. Fabian Stang Monday evening. About 200.000 people were gathered at the streets and squares in Oslo and all major towns and even villages across the country. Political divides are closed during these mourning days and the nation stands united together. International analysts and police however, are starting to debate and investigate whether the right wing extremist was alone or if he had any other terrorist cells in his network.

Crown Prince Haakon spoke to the people gathered in Oslo and stated: "Tonight the streets are filled with love. We have decided to meet cruelty with friendship. We have decided to meet hate with unity. We have decided to show what we stand for. The Norway we want to have can nobody take away from us. We can't undo what's done, but we can choose that noone has to stand alone. We can choose to stand together. We must meet every day, armed to fight for the free and open society which we love so much." The Prime Minister and leader of the Labour Party Mr. Jens Stoltenberg and Mr. Eskil Pedersen who is the leader of the Labour Party youth movement both underlined the need for an active democracy and humanity. Hate will not be the answer. That is not the way Norway is responding to evil actions. Mr.Pedersen who was one of the survivors from Utøya also stated that it's very important to keep up the work against racism. All Nordic countries marked one minute of silence yesterday. This expressed the solidarity between the Nordic countries. Leaders from many countries expressed support to Norway. Many foreigners joined the rally in the cities and towns and even some individuals came to Norway just for that purpose, just to express their solidarity.

Is the crime a single isolated case ?
We all hope that this unthinkable crime is isolated to one person with evil plans. But can we be 100% sure that it's not rooted in a wider network ? Can it inspire other cases ?

Yesterday the perpetrator was brought to the court and he expressed that his motive was to strike against the Labour Party as hard as possible, because they in his opinion are trators and opened the country for muslim take over.He is in his own weird thinking a Knight Templar fighting against what he claims to be cultural marxism allowing muslims to take over Europe. He is against not only Norwegian government, but also EU, USA etc. as theys topped the christian Serbs to get rid of Islam. He claims to be christian but is first of all a political extremist. One question that has come up is wheather he was alone or not. In his manifesto he also expresses that he is in connection with European right wing anti muslim networks and cells in UK, Serbia and other countries. Some are even declared nationalists, christian conservatists or they include neo nazi groups. Anders Breivik has been shopping explosives, guns and effects in different countries and had according himself and police contacts in Lithuania, Poland, Hungary, Russia, Netherlands, France, USA and even China.  He has also been active at social media.

A relevant question is how the European culture can avoid to develop a right wing anti muslim directed terror in the situation where we obviously have quite significant anti muslim and anti socialist fractions in almost all countries ?

Probably it will be long time between these kind of mass murdering of innocent people ! But what about car bombs, sabotages, harrasment, fires, injuries of minorities, disturbance of businesses etc.. ?

Have the politicans, the police force in each country, the intelligence services and Interpol a good enough picture of the situation ? Do they understand what's going on ?? Are the analyses and pojections good enough ? Will the situation escalate ? Have they really understood the effect from how extremists use the social networks, how criminals and extremists easily can move within the Schengen regime, the consequenses of migration, unemployment, econmic crisis in several countries etc.?

Even if its painful to think about, Norway has to admitt that this "wild viking" came from within. He is one of us, raised by Norwegian parents, had Norwegian friends, neighbours and collegues, went to Norwegian schools and even was  member of the Free Masons and the Progressive Party (FRP). This man was probably inspired by a general scepticism against the blend of cultures and  towards a liberal social democratic society. He went so much further than others, but in the basic philosophy some claim to accept parts of his thinking.

Psychiatrist are discussing if he is crazy ? A psychopat ? Obviously he is different. But is he mad ?
How can sick people manage to develop rational political plans during a decade and regard mass murder as a technical implementation of the political strategy, as a tool for setting a new agenda in Europe ?

Many questions will definately have to be discussed. Norway and Europe will not be the same after this incident.  How to coope with extremism on a larger scale in a multicultural Europe is probably one of the issues media, experts, ordinary people and political parties should address.

Video and a nice song from Oslo:
http://www.youtube.com/user/MittLilleLand2011 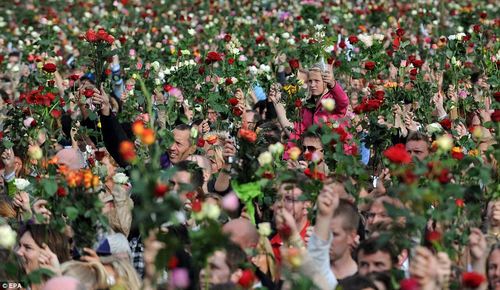 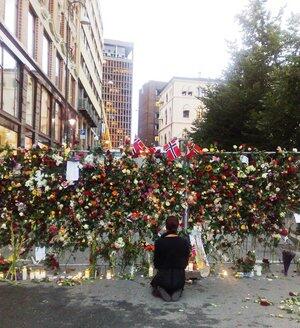