65.000 persons(1.3 %) population growth in 2010 is the all time high according to preliminary figures from SSB. During last decade only Luxembourg and Turkey grew faster according to Eurostat. The Norwegian population growth escalated after 2004 when the EU 25 was established. 12 % growth during last decade is a significant growth compared to average in Europe and was mainly (2/3)caused by net migration. The population which counted 4 millions in 1975, will probably pass 5 mill. in the year 2011. It may pass 6 millions before 2025 and Norway will probably advance to become Scandinavias second largest population.

Why is Norway growing ? The most obvious answer is the strong economy which is outstanding at a European and even world level. The only European country which raised the average salaries throughout the financial crises. During last decade Norwegian avarage real salaries (adjusted for inflation) grew with 30 %. During the same period the German real salaries declined with 5 %. Are there other reasons behind this boom ? Well, some will point out democracy, safety and a non corrupt justice regime as an attractive asset. A generous welfare system targeted families, disabled and elderly population are also reasons likely to attract immigraton. The Norwegian ecomomy is fueled by fuel. The oil and gas sector is the basic economy.The demand for engineers and specialist within this sector is significant. However, also all other sectors are in need of workers. Especially the healt and social care sector need labour. And workers are coming from all over the place. In Oslo alone there is now more than 60.000 workers from Sweden. That is 10 % of the total population. Almost all hotels and restaurants within the major cities are staffed by workers from Sweden. Other nations which provide big immigration to Norway are Poland, Germany, Iraque and Somalia. During last years the Lithuanians have increased significantly. And so has immigration from Iceland. The net migration to Norway was about 45.000 in 2010. About 600.000 people are immigrants or born in Norway with immigrant parents. That is about 12 % of the total population. In Oslo city there is about 27 % belonging to this group.

The largest growth is within and around the largest cities, Oslo, Stavanger, Bergen and Trondheim. Most of the smaller towns and cities have also some growth . However, it depends if  they are successfull or not and it depends on the location. The Telemark Research Institution has analysed all 83 subregions in Norway and made a ranking of attractiveness. It's interesting to observe that the attractiveness is not so much related to natural beauty as it is related to location, housing and social meeting places. E.g. the subregions which are most attractive  for settlement are mostly located around Oslo and other big cities. These are the regions which also have a domestic net migration and a net migration from abroad.

If we look at some of the municipalities well known from the IC network  we see that Alta is continuing to grow fast, more than 2%. Hammerfest almost 2 % and Sør Varanger at 0,7%. Spydeberg is also growing with 2 % and Notodden, Mandal, Marker and Eidsberg has a growth. Interesting also to see that Tromsø is growing with 1,5 % and the bigger cities Bergen, Trondheim and Stavanger are all growing more than 1,5 %. Also Ålesund, Drammen Arendal, Fredrikstad ,Kongsberg and Porsgrunn are growing more than 1 %.

At the peak we find Ullensaker (Gardermoen airport area) with 3,6 % growth. Other exceptional results are Os(2,9%), Sandnes(2,6 %), Gjerdrum, Skedsmo and Aurskog-Høland.

It's also interesting to notice that during the years 1994-2008 there were more Norwegian citizens migrating out than in. This changed in 2009 when there again became a net migration of Norwegian citizens. Is it because Norway today is again more attractive even for native Norwegians living abroad ? 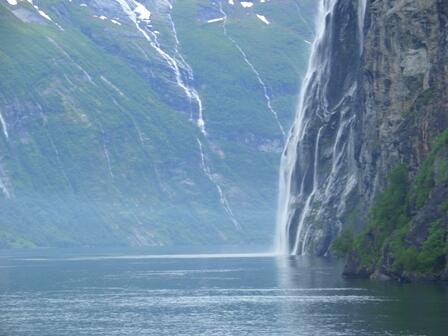