Many ask how Dainius Kreivys who will lead the Ministry for  Economy will handle the financial crisis ? He's a business man connected to the "Baldenis” furniture company and also a conservative. In a Baltic Times article Ms Jurate Novagrockiene of the Vilnius University Politics and International Relations Institute says: "I doubt that Kreivys, who was quite a failure as a businessman, is going to be a good Economy minister. He suggested that subsidies should be reduced for agriculture, and producers should change the field they are working in. That is not a wise decision now, when export is down.” However, she thinks that Jukneviciene and Usackas are the right people to take minister jobs in the Defense and Foreign Affairs ministries, according the same article.

Another party in the new Government is the Liberal Union. They will be in charge of the Ministries of Education and Science, Justice and Transport and Communication.National Resurrection Party will get Culture and Environment. Liberal and Center Union will get the Interior and Health care.

External relations
One of the most interesting questions is how the foreign policy will develop with the new cabinet. According to political analysts the new Minister of Foreign Affairs is not regarded as a hardliner towards Russia. Usackas has been an independent right-leaning candidate, has worked for a long time in diplomacy and in the Foreign Service. Currently he is the ambassador to UK. 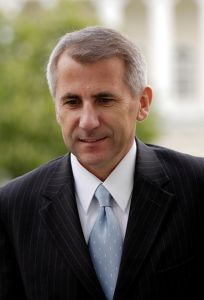 Unlike other conservatives he is not so harsh towards the big neighbour in the east. However, some big issues for Lithuania are the domestic energy situation, integration within EU and there is the NATO - Russia relation. Medvedev has threatened to put up missiles in Kaliningrad, close to the Lithuanian border. Usackas will in deed need his diplomatic skills. According to some of his statements to the press he wants more EU in Lithuania and more Lithuania in EU and he wants to have a "circle of friends" in Russia.

The new Minister of Foreign Affairs has expressed that he is not afraid that Lithuania will have similar issues like Georgia in the relations with Russia.