You have been Alytus City Municipality administration director for 4 years. Now after a break here you are in the position of the city mayor. What it feels like?

It has been an intense 1,5 year when I only was a council member. We have been in opposition trying to be heard. The feeling was stimulating to go forward and clarify all problems the city had. Now we all can see our actions were correct and the results would have been different if our warnings would have been taken into consideration. Unfortunately, the final was shattering which did not give any honor to our city.

Now the time is short. The attitude by the administration is careful. But the feeling is good – it’s like putting the justice back into order.

What are the first steps after taking the mayor’s chair?

We have to restore the authority of the local government and the contact with the community. We have to speak to people in their language. And it looks like people are listening. The most important we have opened the door both direct and indirectly. The main municipality entrance was unlocked for citizens (before only “one-window system” door was available which caused access inconvenience for some attendants). And in addition the authorities are open to television, radio, other media channels, many meeting with citizens are being organized.
Which direction Alytus City will choose now?
Alytus will be an industrial city. This is what the city is like. Of course entertainment, culture, infrastructure is very important. But Alytus is an industrial place. We will look into old businesses we had, old buildings and arenas waiting for revitalization. We already have some concrete names of possible investors.
In addition the city has to work on public spaces for people. We just had an idea to open secondary schools for the use of families and other community members on weekends. So they can use conference and sport halls as much as they like to. This does not cost much but helps a lot to improve the relations among different community sectors.
We also have an old idea to open several skating rinks in the city. So both adults and children can have more places to go to and have fun.
What is going to happen with the currently ongoing projects?
We are analyzing those projects now. The funding is already provided to the most of them so it’s not so easy to stop it. The problem is that the estimated budgets are increasing during the implementation stage.
There is a project started to reconstruct the Rotuses square (the main square in Alytus city). The paving bricks are going to be changed with granite. Does the city really need it now? Is it a good use of money? I don’t know. But the poject is under the process now and you cannot stop it.

We all can see a big issue happenning in the Baltic States. A significant number of people are leaving Lithuania and Alytus too. How do you see the situation?

Yes, the emigration from Lithuania is a big issue. The last year I have been working at Alytus college teaching public administration. I’ve been in a direct contact with young people so I could get all the information from the first lips on how they see the situation, what problems they face, what do they define as the main needs for a better situation. I have asked them to write down what improvements they wish to see. And of course environment for new businesses and creation of new job places are the key words.

I don’t have the single correct answer. The good side of migration is that people have a possibility to travel and experience new things. The problem is that when they return home they face a wall which don’t let them to settle down so easily.

It is for sure the priority issue the government of Lithuanian has to solve.

How do you see Lithuania in an international scale? Will cooperation with other countries be important to the municipality now and in the nearest future?
During the management period of the last leaders there were several job positions eliminated from the international relations department. Now there is a couple of persons left to deal with some small practical details. Alytus municipality is working with structural investment funds and there is no space for humanitarian projects. People are sitting inside this building and cannot see what is happening on the other side of the window. We are lacking for competence raising activities and we are lacking for people who have fresh ideas and sense of responsibility. 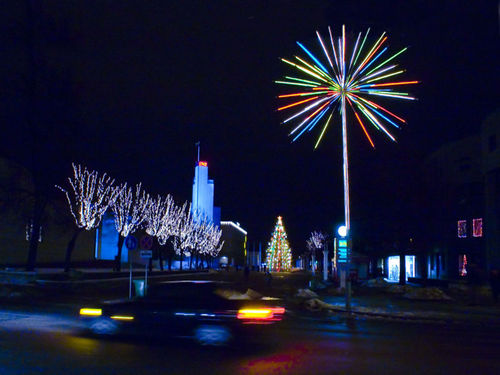 You have been involved to several international projects with the IC Network. What was the greatest benefit that you gained?
The most important thing was that I have changed my attitude towards many issues. I have learnt to see more things and see them widely. IC projects gave an opportunity to present our city internationally and learn about others. Many things that at first seemed to be unrealistic for Lithuania were implemented step by step without even noticing it.
We have been cooperating with Mandal in Norway on management and administrational issues. It was unusual to see the city mayor coming to the job by bicycle. Only the country with deep understanding of culture and with high intellectual understanding can afford it. Leaders have to be a part of a community. Lithuanians have a lot to learn about it.
However, it is not easy at all to attract Lithuanian municipalities to participate in soft projects. Why do you think it is importnat to be involved?
During the time I was not in the leading positions in Alytus I was missing for this kind of projects a lot. It is very important to realize that soft projects are the crucial basics for the start of any hard projects.
There are no recipes of how to become a more advanced society. It happens by using many means during a long period of time. And this is something to be learnt from international competence and awareness building projects like IC Network is running.
You came to the position of a mayor in rather untraditional circumstances (elected after the dismissal of previous mayor accused of corrupted actions). Is it a step forward to a more democratic and transparent Lithuania?
I might be too brave to tell so – people should say. However, I think this change in the municipality was a light in a negative background. Honest and conscious politics have a future. The commercialized politics with millionaires and showmen in the lead positions will pass. It is a question of time and the time is coming. Our society is not stupid. People are just being confused. After sometime it will become clear which things are real. The scandal we had here will not have any extraordinary outcome. But the judgment for further political career was made.
Is there anything you would like to add?
We are open. I do not have to be in a lead position. I only want to see a result. In any other situation I am ready to work with a mayor we have and the majority there is in the city. We are ready for cooperation in a positive and open way.
What is your wish for the coming New Year?
I wish hope and faith to all of you. All the difficulties we will have in our cities and lives will be solved. A life without hope is black. Therefore, we all have to add a share of effort. If me, you, a friend, a neighbor will add something, it will be brighter to live for all and each of us.
Thank you for your time. Innovation Circle Network wishes you all the best luck in the year 2011.
Alytus is a municipality of nearly 70 000 inhabitants in the southern part of Lithuania. It is the sixth biggest city in the country very close to Polish and Belarus borders. The city has joined the IC Network in 2007 and was the lead partner in the Innovation Circle project.
The Mayor was talking to Indre Kreivyte
Copyright © 2007 Innovation Circle
Web levert av CustomPublish