Murmansk Governor Dmitry Dmitrienko summarized the MIEF event: «Thanks to the forum one paid attention to the Murmansk Region as a region where there live courageous, energetic, interesting people. They saw that the Murmansk Region is not only an industrial region, but the territory where the culture develops, new characters and new human relations develop. These aspects are not less important, than economic achievements».

Results of MIEF-2009 exceeded expectations.
The governor of the Murmansk Region Dmitry Dmitrienko admitted that the organizers did not expect such interest and such number of visitors. Volume of investments which will be enclosed into the economy of the Murmansk Region as a result of the agreements signed within the framework of the Murmansk International Economic Forum, will obviously exceed the assumed sum of 30 billion rubles. With that he mentioned that the results of MIEF-2009 cannot be evaluated only by financial indicators.

«Adjusted totals will be summarized later, but it is already obvious that there were twice as much visitors. And such interest is explained on the one hand by the importance of the forum, and on the other hand, though it is not accepted to praise oneself – apparently, we have seriously come up to its organization», - added Dmitrienko.
The governor of the region said that after negotiations with the chairman of board of JSC «Gazprom» Alexey Miller, he can absolutely clear say that the Stockman project will be realized.
«Soon road building will be started in Teriberki region, as well as construction of movable habitation for those who will work at initial terrain objectives of this project. That is why it is possible to state that the project has started», - explained the governor.
Murmansk Transport Hub.
Within the framework of the Murmansk Economic Forum the conference «The Murmansk port in the international intermodal transport corridors. Murmansk transport center complex development» took place. The project of complex development of Murmansk transport center (МТC) is an integral part of the federal program of Russian transport complex development.

Unique position of the Murmansk port, nonfreezing gulf, true output to the World ocean and closeness to the international transport routes – allow it to take a special place among other Russian ports. Besides, if the forecast takes acknowledgement about further ice melting in the Arctic Regions and extension of terms of navigation of Northern Sea Route, attraction of the Murmansk port will increase for a large variety of maritime countries. And in this connection it can become the major center of international transportations in all directions.
Perspective theme but demanding careful study is a binding of МТC to the project of Stockman deposit development. It is the question of possibility of involvement in the scheme of МТC of municipal units of Pechenga, Teriberka and Vidyaevo, considering probability of creation port complexes there within the framework of the Stockman project.
«Increasing of the effective work of fishing industry» conference.
Approximately 98 percent of well-known sea species live in benthic environment. A big specific variety of a deep-water bed was discovered for the first time in the late sixties of the last century, but only a small part of the numerous ecosystems which was found at the bottom of the ocean at a depth of more than 200 meters has been explored now.

Spokespersons in particular noticed that the deep-water cropping which is in many regions of the world, often leads to harmful consequences of sea ecosystems. This environment occupies more kinds, than all other ecosystems of the planet altogether. One more threat for hydrobionts of northern seas the participants of the conference see from outside the project of massive Stockman and other hydrocarbons deposits, platforms building, pipelines, plants and creation of corresponding infrastructure.
It was offered to develop mariculture economy or pasturable cultivation of valuable species of hydrobionts as the main compensatory measure in this case.The present meetings will help experts to develop algorithm of realization of expanded analysis of modern fishery control regime in the Arctic Regions.

Conference «Development of private-public partnership as the key factor and indispensable condition for realization of regional strategies and investment project implementation» showed that both interested parties are adjusted optimistically.

During the conference participants considered procedural and institutional development models of regional infrastructure with the use of private-public partnership instruments (PPP) and project financing.
In a circle of the questions which came into the view of the conference participants were also discussed special economic zones and change of approaches to their creation, use of PPP instruments during realization of economic strategy of the region, mechanism of support of regional projects through Investment fund of the Russian Federation. Active exchange of opinions took place concerning the risks arising during realization of PPP-projects in Russia.
The Barents Euro Arctic Council.
Among the conferences and meetings during the forum the governor especially allocated Session of the Barents Euro Arctic Council at the level of Ministers for Foreign Affairs. In his opinion, during the session a curious exchange of opinions took place. «Leitmotif was as follows: firstly, the Council is the place where political decisions are made, and only then the governments should embody them in the reality. Secondly, interaction experience in the Barents Euro-Arctic Region of different countries which counts already more than one and a half decades, shows that these countries can work, make agreements and that such model of interaction can become a pilot for all who work in the Arctic Regions», - admitted Dmitry Dmitrienko.
During the Murmansk International Economic Forum so many issues in different spheres were discussed, and what is more important, not only discussed but done as well. All the intentions of the participants and partners are full of optimistic sentiments. According the governor of the Murmansk Region Dmitry Dmitrienko, MIEF has already influenced the region.
Dmitry Dmitrienko:
«Thanks to the forum one paid attention to the Murmansk Region as a region where there live courageous, energetic, interesting people.
They saw that the Murmansk Region is not only an industrial region, but the territory where the culture develops, new characters and new human relations develop. These aspects are not less important, than economic achievements». 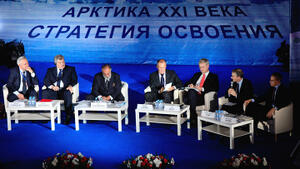