“Most tragic fire in recent memory”

It is a black day for Estonia. On Sunday afternoon ten children died in a fire that broke out in an orphanage for disabled children in coastal town of Hapsalu. 37 children and nine adults where in the building when the fire broke out. Local media reported that the blaze spread quickly.

Today, Estonias President, Toomas Hendrik Ilves, drove to Haapsalu where he met Neeme Suur, Lääne County Governor as well as the organiser of rescue works, Priit Laos, and Police Commander of Haapsalu, Margus Kaldma, who provided an overview of the rescue works and solutions that were found to the main problems of Haapsalu Children’s Home, including the provision of temporary accommodation for the children.

“Such a catastrophe – the most tragic fire in recent memory – should not have happened in the first place. As far as we know, all the measures to avoid it had been taken, but still it happened, President Ilves said. In January fire safety inspectors had found that the building met all the necessary criteria. “We need a thorough analysis, as soon as possible, that will help us to avoid similar events being repeated in the future.”

The Head of State also visited the site of the tragedy, where he lit a memorial candle and met with the employees of Haapsalu Children’s Home. Volunteers, including the members of reserve rescue team and the members of the Defence League, went to assist the rescuers and those affected by the tragedy in temperatures of minus 20 degrees.

The government has announced that Monday will be an all-nation day of mourning for the victims. 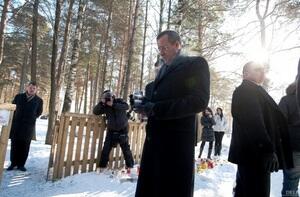