This blog has been delayed a bit because I have been away on holiday. Of course if, like me, you are professionally interested in what makes places attractive, then the line between work and holiday is difficult to draw. I cannot make a journey or visit a town without thinking and evaluating what I am seeing.

Of course, it’s not the same as seeing the data, plotting the graphs, calculating rates of change and all the rest of the quantitative analysis that is so essential to understanding a local and regional economy and its connections.  But, being on holiday excuses me from doing that bit of the work. Meanwhile, we have an expression in English, “seeing is believing”, and I think there is truth in that. Oscar Wilde, naturally, expressed the same point with more wit: “It is only the shallow people who do not judge by appearances.”

One of the places we stopped at on holiday was Morecambe. This town grew as a seaside resort in the nineteenth century. It is about 70kms distant from what was then the industrial belt of South Lancashire, where thousands worked long hours in the factories and textile mills. The railway connected this smoke-black urban market to the sands and fresh air of Morecambe with its views of the hills of the Lake District across the expansive bay. Bed-and-breakfast villas and even grand hotels sprung up to accommodate those escaping the drudgery of work for one precious week in a year.

Nothing lasts. Oscar Wilde had written “I don’t desire to change anything in England except the weather”.  The British “summer” is still with us and will no doubt survive global warming miserably intact. However, by the 1970s British workers knew that even though they could not change the English weather, they could escape it. The deserted the municipally erected shelters from wind and rain on the promenade of Morecambe (and its sisters around the English coastline) and headed for the beaches and sunshine of the Mediterranean.

By the 1990s many of the empty bed-and-breakfast establishments left behind had becoming home to people living on state benefits, who found it easier to access housing in declining seaside resorts than in other parts of the country. The spiral of decline for places like Morecambe looked terminal.

The Midland Hotel had been the jewel in Morecambe’s crown during the resort’s boom years. It was built in the 1930s and replaced a previous hotel that had been built in the 1850s by the railway company and stood opposite the station. The architect was Oliver Hill who had visited the Stockholm Exhibition of 1930, where he had seen and been seduced by the clean lines and holistic design philosophy of Modernism, at a time when British architecture still had a very traditional character.

Oliver Hill’s inspiration was Alvar Aalto, the Finnish architect and designer who is regarded as the ‘Father of Modernism’ in the Nordic countries. The Midland Hotel that he produced managed to look both impressive but human in scale, elegant but also welcoming, English pragmatism and Art Deco features diluting some of the more dogmatic austerity of some Continental Modernists. It stood on the promenade proudly facing a crisp, white, ocean liner-like elevation to the sea, and instantly became the place to stay in Morecambe.
By the late 1980s it was owned by a company whose main business was in cinemas and clubs rather than hotels. They were reluctant to invest in the Midland. In 1991 it went to sale by public auction. There was little competition to buy it, and the purchaser was a businessman who was described as “a likeable rogue”, who quickly came into dispute with the local planning authority over what he could or could not do with this architecturally important building – including re-painting the hotel bright yellow with a turquoise trim. Eventually he applied for a change of use from a hotel to a nursing home – his other line of business. Then suddenly he died from a heart attack just before his 50th birthday. When his affairs were gone through after his death, he was found to be insolvent and the law required that the hotel be sold to pay off his creditors. However, there were no buyers. Meanwhile the council’s environmental health officers condemned the kitchen and closed it as a health risk. Then the heating system broke down and the hotel had to close completely. The hotel was boarded up and became prey to vandals.

The rescue came in 2003 through Urban Splash, a company that had won awards for ground-breaking property-regeneration work, particularly in Manchester during the 1990s. From the start Urban Splash saw the hotel as a catalyst for the wider regeneration of Morecambe. It promised to respect the qualities of the 1930s original hotel, but to also give it a 21str century design make-over, including making it the first carbon-neutral hotel in the UK.

The results
Urban Splash has produced an outstanding solution to the problems of this once derelict building. Key features from the past, notably a pair of sculptured sea horses on the exterior, have been retained and celebrated in clever ways in the interior. An original bas-relief that was listed for protection but had mysteriously ‘disappeared’ during the 1990s, was restored and placed behind the reception desk. The elegant cylindrical red-carpeted staircase leads to imaginatively designed rooms that pack key facilities like a wardrobe, desk, TV and even the toilet, an attractive wooden ‘box’. A new sun lounge has been added on the seaward side of the building, and while it cannot guarantee the sun, it is an excellent spot to sit, sip a drink and watch the world and the clouds go by.

Transforming a latent asset from an eyesore into a spectacle once again has lifted the whole feeling of Morecambe. There are now plans to refurbish the Winter Gardens, a grand though more traditional building dating from 1897, across the street from the Midland. It had been the resort’s premier ballroom and also had shops and gardens and other entertainments but closed in 1977. Local people and visitors who loved the old building have kept faith with it through the long years of dereliction as the “Friends of the Winter Gardens”. A charitable trust now owns the building and plans to make it into a multi-purpose venue.

This saga should be inspiring to anyone struggling to improve the attractiveness and competitiveness of their town. It shows what that assets really do have to be cherished, especially through the bad times. Quality and vision are priceless and cannot be traded at a public auction. Developers who really are prepared to take risks (and not just look for a ‘fast buck’ or a safe return through bland repetition of a formula) are precious. The public sector has a key role to play in holding firm in its regulatory responsibilities but also putting in the investment in the environment that will create private sector confidence. The council in Morecambe have carried out a lot of investments along the seafront, but a key part of them is a series of statues and artworks that have people lining up to get their pictures taken next to them. Design-led regeneration can be an option, but it has to be done well. It was Oscar Wilde who quipped “Nowadays people know the price of everything and the value of nothing”.

The hotel’s website is www.elh.co.uk/hotels/midland/index.aspx. The site for the Friends of the Midland Hotel is www.midlandhotel.org. The site for The Winter Gardens is www.thewintergardensmorecambe.co.uk. 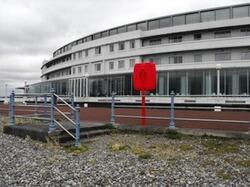