Making Progress in the Neighbourhood

A handbook on “European Union Funding"

The handbookis available in English, French, Arabic and Russian and it is divided into: the funding instruments, how EU Delegations deliver cooperation, the Thematic Instruments, How Funds are Allocated, Grants and Contracts, Budget Support and Cross Border Cooperation.
It also looks into how governments in the Neighbourhood partner countries are supported to bring about the change. The handbook also looks at institutions offering lending, like the European Investment Bank, and lists some ongoing funded projects giving the reader an idea of what’s available.
The handbook also includes a glossary of EU funding terms, with links to where one can find out more. Spread over five pages, the EU Funding Glossary can be printed out separately making it a stand-alone product.

This handbook is part of a series of publications produced by the EU Neighbourhood Info Centre. Some of the others are: A Photographer’s Handbook (2012) and A Journalist’s Handbook (2012 edition). Also available on the Info Centre website is an online Neighbourhood Glossary, in an A to Z format (English, French, Arabic, Russian) and a separate glossary for each region, East and South, in pdf format.

Download the European Union Funding for the Neighbourhood and Russia in English, French, Arabic and Russian. 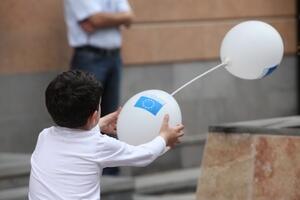