Lighter Quicker Cheaper (LQC) are the catchwords of a local development strategy that has produced some of the world’s most successful public spaces by capitalizing on the creative energy of the community to efficiently generate new uses and revenue for places in transition.

LQC aims to create more lively and engaging public spaces that encourages citizens to get experimental and try out a variety of light-weight, low-cost things in the near-term to learn about how a space operates - before making a big investment to permanently re-design a park or plaza. LQC taps into local talents (e.g. citizens, entrepreneurs, developers, and city staff) to quickly translate a community's vision into reality and build momentum for further improvements.

Now Texas Public Radio encourages San Antonio’s citizens to use LQC interventions to improve their city. Whether a neighborhood’s blind spot is a playground where no one plays, a parking lot where cars seldom park, or a vacant area under a highway overpass, citizens can play an integral role in making that spot into one of the most unique and engaging in town.

Under the lines: “Get in touch with your creative self and envision the possibilities of a public space in your neighborhood” suggestions were collected and now ideas will be analyzed for feasibility and effective use of the principles of Lighter Quicker Cheaper. Out of these suggestions five projects will be selected for a public online vote. The project with the most votes will be realized on September 15, 2012, where the partners will come together to construct the community project. 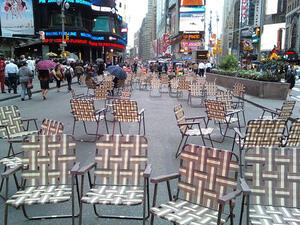