The goal of creating the Scent of Lithuania was not only to impersonate the fragrances of the country, but also to tell a story about its cities and villages, its nature, ancient traditions and cultural heritage, the character and the achievements of its people: everything what Lithuanians are justly proud of and respected for. Therefore Lithuania dared to pioneer with a new type of national symbol to convey the character of the ex-Soviet Baltic state in a fragrant way with a bottle of perfume.

"We wanted to create something special, representing Lithuania and the Lithuanian character, " Mindaugas Stongvilas, an expert in emotional communication behind the project told the Lithuanian daily Vilniaus diena.

The perfume "Lithuania" is a blend of sandalwood, cedar and musk intended to connote the Indo-European origins of the Lithuanian language as well as Lithuanian strength of character, its designer says.

"For Lithuanians to identify themselves with this perfume, we've added the smell of wood fires that can be associated with pagan rituals, as well as moss and wildflowers," M. Stongvilas said.

The creation of the perfume has been entrusted to France's Galimard perfume from Grasse on the Riviera which has been in business since 1747.

Lithuanian soldiers deployed in Afghanistan have also received samples. Soon it will be the turn of Lithuanian embassies, hotels and airports.

Scented "Feeling Lithuania" candles are also to go on sale next month while an entire line of products is being designed.

Lithuania is the first country to come up with the idea to create national parfume. News have gained a lot of foreign press attention. It even encouraged famous comedian Stephen Colbert from USA, hosting "The Colbert Report “,  to create a report on the news. It can be found here: http://www.colbertnation.com/the-colbert-report-videos/370726/january-11-2011/lithuania-perfume 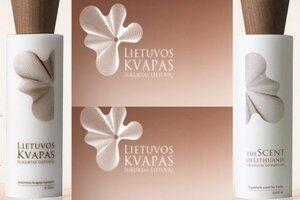