The voluntary cleaning up action “Lets do it 2009” had a great success says the organizers in Latvia and Lithuania. Preliminary 110 000 people was attending the action in Latvia and about 50 000 Lithuanians were taking care of their country. The exact amount of collected garbage is not known yet and will be announced by the end of April.

“Lets do it 2009” is a one day project, which was taking place not only in the cities of Latvia and Lithuania, but covering both countries in complete. Even the smallest regions had their volunteer groups. Organizers say there were more people than expected, because a lot of people came without having registered.

The centre of Vilnius was cleaned up by the Prime Minister Andrius Kubilius, and other leaders of Lithianian Parliament. Also, the new candidates for Lithuanian President were taking part in the action.
Lithuania was not only collecting the trash, but also planting trees and flowers. Alytus region presented a number of lilies to plant all over in Alytus region.
In the evening all the members of the action were invited to concerts.

“Let’s do it” was created by Estonians last year. Later the initiative has moved to Lithuania, Latvia and other neighbor countries. This is an outstanding example how great idealistic ideas can become reality and almost with no funding. To clean up the countries and plant oaks was not the only good thing; the most important was the human feeling among people that we still care of immaterial values. 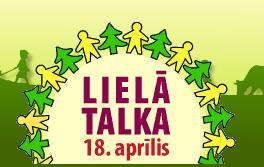