Another uniqe cultural building will be erected in Oslo. The "Lambda" will accommodate the new Edvard Munch museum and the Stenersen museum. It will be established near the waterfront and the spectacular Opera house which was opened in 2008. The city council was divided. So were experts and citizens in Oslo. Rarely has a piece of architectur caused so much public debate, harm and supportin Norway. Herreros Arquitectos from Spane won the international architect competition.
The supporters are very happy about the decision and claims that Oslo now can for real put Edvard Munchs paintings on display within a unique cultural environment. They also argues that the architecture fits very well to the purpose of the building and to the art made by Edvard Munch which itself was politically incorrect and challenged the coontemporary opinion. The collection includes world famous paintings like Scream and Madonna. The project is adding on the new vibrant waterfront area which every day is visited by thousands of tourists as well as Oslo citizens. 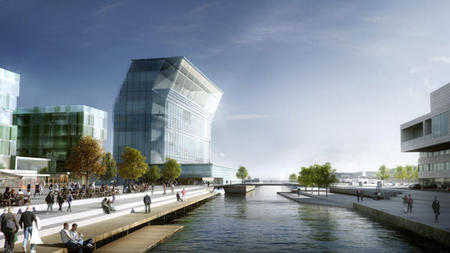