How can people directly benefit from their EU rights? Which policies and programmes do exist? Which reforms are needed to improve our every-day lives? 20 years after the introduction of EU Citizenship the European Parliament and the Council decided that 2013 will been officially named "The European Year of Citizens" …

"After 20 years of EU citizenship, much has been achieved. It is time to reflect on where we stand and what the future should bring," said Vice-President Viviane Reding, EU-Commissioner responsible for Justice and Citizenship. "People expect concrete results from Europe, and with cheaper roaming charges, better rights for crime victims and easier shopping online for consumers, that is exactly what we are delivering. We want to keep delivering on citizens' rights and this is why we are dedicating a full year to those at the heart of the European project – our citizens. The European Year of Citizens is an opportunity for us to listen and learn from you what you want and how we can build the European Union of the future together."

The European Year of Citizens coincides with the 20th anniversary of the introduction of EU Citizenship, when the Maastricht Treaty came into force in 1993. 2013 will also be the year when the Commission adopts its next EU Citizenship Report, which will present further targeted EU initiatives to remove the remaining obstacles that hinder citizens from fully enjoying their rights. One year before the European elections 2014, it is also the right moment for a broad debate about the future.

To prepare the ground for the European Year, the Commission held a broad public consultation between 9 May and 9 September 2012 asking citizens what problems they have encountered in exercising their rights as EU citizens (see IP/12/461). The contributions, which are currently being analysed, will feed into the Citizenship Report to be published on 9 May 2013.

As part of the Year, politicians have started holding debates with citizens directly about the future of Europe. Such debates will be held all across the Union over the course of 2013. Everyone will be free to join the debates: http://ec.europa.eu/european-debate/interactive_map/estonia/index_en.htm. The first debates already took place in Spain, Austria and Germany and many more are still to come. The European Year of Citizens will be officially launched by a debate with citizens in Dublin on 10 January 2013, coinciding with the start of the Irish presidency of the Council. 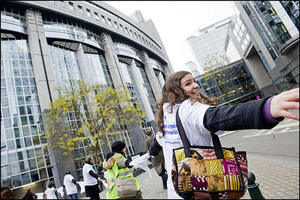