Is Russia losing the propaganda war ?

USA is now backing Georgia in the propaganda war. Obviously US wants to influence the story telling after the Ossetian war. Russia is already on the defensive according to Paul Reynolds, a correspondent in BBC news. While the Georgian president was giving press conferences to the world press in Tblisi, Russia was more reluctant to invite world press to report from "their side". Can the lost war turn into a diplomatic victory for Georgia and the USA ?

World media is the arena for the propaganda war
Journalists, politicians, analysts, experts, witnesses, humanitarian organizations, networks and others are actors who all have roles in the story telling. The one who wins the propaganda war normally also wins the real conflict in the long run. Is it true that the Russian military used cluster bombs in Gori as reported by "Human Right Watch"? Was it true that the Georgian army killed about 2000 civilians in South Ossetia before the Russian "peace forces" entered the scene ? The word "peace forces" itself, is it an adequate word ? Or is "occupant forces" more relevant ? Will the Russian authorities ever learn to address international media in a critical conflict and gain support from public opinion ? Maybe the beginning is to stop shooting at and killing journalists which now is going on in the war zone. Another issue to stop violence against civilians. It's impossible to win international support today if terror against innocent people is accepted .

Journalists from Turkey attacked (view the dramatic video from Gori)

It's interesting to notify that the German Chancellor Angela Merkel was visiting President Mevedev in Sochi while the US secretary of state Condoleeza Rice the same day returned from Tblisi to Texas without visiting Moscow. US officials and media hesitate to critisise or blame Georgia. They put more or less all blame for the current crisis on the Russian side. However, many reporters and experts on Russian / Caucasian affairs in Europe are pointing out the Georgian attack on South Ossetia as a tragic mistake from President Sakashvili. He should have known better, are some of the comments. According to some reportages, this is also what many people in the streets of Georgia now say about their president, while others are strongly supporting him.

It's also interesting to see how e.g. Norwegian journalists, politicians and analysts are commenting differently about the current situation. In a radio program at NRK the 6th August the former UN United Nations Undersecretary-General for Humanitarian Affairs and Emergency Relief Coordinator Jan Egeland commented that he was surprised how a "classic national minority conflict" is not searched resolved by compromises and negotiations but mainly by military means. He also pointed out that the Georgian president educated from western universities so easily falls into the usual pattern in Caucasus. Conflicts have been created during centuries because of revenge and lack of trust. He mentioned how Scandinavia and other corners of the world have changed such patterns and now are resolving conflicts without arms, while some areas still are stuck in old conflicts and predictable reaction patterns

The Norwegian Minister of Foreign Affairs, Jonas Gahr Støre has criticized Russia quite directly in this conflict. However, he mentions that the way Russia and Norway are resolving problems in the north is totally different. And the NRK (national TV and radio) is fairly balanced in their reportages. They have reporters both in Tblisi and in Moscow and it's interesting to see how even reportages from the same channel can give quite different perspectives. The Baltic States, Poland and Ukraine are all very directly supporting the Georgian side in this conflict. During an extraordinary session of European Union’s General Affairs and External Relations Council on 13 August in Brussels, Lithuanian Minister of Foreign Affairs P. Vaitiekūnas stressed that Russia’s aggression would have negative consequences for the EU – Russia relations. The words are in general tougher and more anti Russia from governments in the east than from the west.

Carl Bildt, the Minister of Foreign Affairs in Sweden, writes on his blogg that the territorrial integrity is very important and that Russia by breaking into Georgia claiming to protect Russian citizens, are also scaring many other countries with a big Russian minority. He is also criticizing Sergey Lavrov pretty directly when the Russian Minister of Foreign Affairs has questioned the territorial integrity of Georgia. "Sergey Lavrov knows very well that this is in direct conflict with international law " according to Carl Bildt.
EU and NATO countries have warned Russia about disproportionate reactions and they monitor the development day by day. The delayed missile shield agreement between USA and Poland is now settled and can also be seen as a consequence of the tensed situation in Georgia. Now even Ukraine consider to accept such a shield. This can be interpreted as a US diplomatic victory.

Why is Russia losing the propaganda war in the world media ? Don't they have a competitive media strategy in the Kremlin, or do they have a bad case which is difficult to "sell" ? Journalists have been killed and injured in the combat zone. Both sides are responsible for those incidents according to witnesses. Some journalist say that there is no law and order outside Tblisi and it's simply very dangerous to be reporting from the country. If the terror against civilians is true and if it will not stop soon then the Russian authorities will surely have a serious problem of explaining the situation even if the incidents are caused by gangsters and paramilitary troops inside the Russian controlled areas. There is a saying that the first thing which is killed in war is the truth itself. The stories told in the media will for most people become the truth. If the media is not bringing favorable stories based on free press, then it's difficult to win the public opinion.

EU and NATO countries have warned Russia about disproportionate reactions and they monitor the development day by day.The delayed missile shield agreement between USA and Poland is now settled and can also be seen as a consequense of the tensed situation in Georgia. Now even Ukraine consider to accept such a shield. This can be interpreted as a US diplomatic victory. 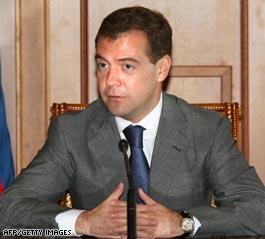