Helensburgh is the largest town in the extensive rural authority known as Argyle and Bute (Scotland does not have municipalities or small kommunes). It was a planned town dating from the 18th century. Its basic lay-out, which has survived to today, is a rectangular grid in which the streets run parallel to or perpendicular to the waterfront. There are obvious influences from the Edinburgh New Town. However, the elegant streets are now cluttered with parked and moving vehicles, and the town centre has struggled to provide the kind of shopping environment that can compete with edge of town locations.

Future Walks and an Ideas Bank

A team of architects and designers have been working in the town to regenerate the centre and the esplanade. New pedestrian links to the foreshore have been created. Areas once given over to parking have been made into an attractive public space.

The team have used some innovative techniques. Graham Ross from the Austin-Smith: Lord architecture practice has little faith in the value of conventional questionnaire surveys as a means of collecting views of local residents. They produce “brown sludge” he says. Instead he used a number of innovative methods to get richer insights about the place. 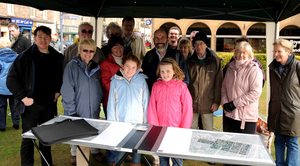 His team identified “nodal points”, the places where people naturally congregate such as a street corner or outside a local attraction or focus of activity. By setting up a small stall at such points it was possible to engage people in conversations about their town. From such encounters the designers could build up an on-line “ideas bank” which they could then work with and translate into possible interventions in the urban fabric. Consultation with local businesses has been an important part of public involvement in the design process.

Graham and his colleagues also organised “future walks” around the town. These are led by local experts – e.g. people who know a lot about local history. The walk becomes a form of story-telling in which the past and the present are brought together to open up discussion and ideas about the future. From such ventures it was possible to grasp the importance of details, and to capture stories and literally embed them in bronze on the pavements.

The theme of combining the big and the little, the overview of the town’s structure with more intimate design work runs through the approach to regeneration. One of the nicest examples is the cast of a tiny shoe that has been mounted on a plinth outside the place that was once the shop where the shoemaker crafted the original of the cast. By such low key but resonant design the place becomes what Ross calls “the backdrop to the story of our lives”. Once installed such plinths open the way to further discussions about other sites, their history and contemporary meaning.

In the spring when the cherry trees come into a riot of fresh pink flowers, Helensburgh now has a “Blossom festival”. It creates an attraction and that helps local business, but it also makes people aware of the quality of the place and how their experience of the town changes with the seasons.

Art as a tool for regeneration of places

Peter McCaughey, an artist who works with architects, engineers and communities, is one of the team working on the project. He argues that the economic slow-down may have some advantages. It has made “slow development” more feasible, creating time for consultation and careful thought about how to manage a town.   He is also enthusiastic about what he calls “the potency of symbols”, which can be found or created in any small town. In this way an arts strategy becomes an important tool in regeneration work. 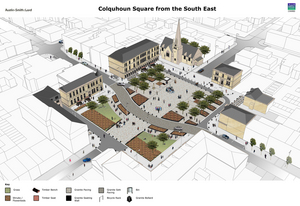