And then I wrote a blog on my World View website. No sooner had I posted the blog than I came across a report by Anna Minton and Jody Aked on "‘Fortress Britain’: High security, insecurity and the challenge of preventing harm” which also addresses the questions about how we go about making our cities safe.
However, as the title suggests, it is set in a very different part of the world than India. What can we learn from these contrasting approaches to this important question?

The high-tech’, high security approach – Fortress Britain
Minton and Aked provide a very good and concise discussion of the theory and practice behind an approach in the UK that is called “Secured by Design”. They explain how new developments seeking planning permission have to comply with a range of high security requirements. They give an example of a gated development in London that won a Secured by Design award and was commended for its “small windows, reinforced steel door and full-size iron gate and grey aluminium military-style roof”.

When a new school is being designed an audit of crime risks in the area is undertaken. This then influences the design of the school. In deprived areas this is likely to result in schools that look like military buildings, with high fences around them, Closed-Circuit TV (CCTV) surveillance and gates with security intercom’ to keep people out.
Such features have become part of security “standards” specified by public bodies when commissioning new buildings. 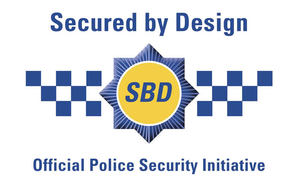 Minton and Aked relate the spread of such townscapes to the rise of “mass private property” – airports, shopping centres, gated communities, leisure parks, conference centres and even university and hospital campuses. In such private environments the priority is the protection of property: in more traditional public spaces where normal policing operates, the priority is the protection of people.
Insurance, finance and real estate interests have worked closely together to maximise returns on their investments. The threat of terrorism and the UK’s long experience of urban violence in Northern Ireland provided the cause and the know-how for the growth of the UK’s security industry. In the drive for “efficiency” many of the jobs that existed as on-site guardians of places have been dispensed with.

In the UK we no longer have somebody sitting in a hut in a public park and generally looking after the park and what goes on there. One of my uncles used to work as a “bus conductor”, collecting the fares while ensuring acceptable behaviour amongst passengers: now the bus driver collects fares and there is CCTV on the bus. Similarly in social housing blocks of apartments the caretakers, who knew and was known to the residents, has gone: the cameras provide the security (when they are working). We have replaced people with technology and in the process stripped away a sense of trust that people have of those around them.

Eyes on the street
There is a different approach to the design of public spaces to increase a sense of security, and it is one advocated both by Minton and Aked and by women’s organisations in India. It is based on the idea that assaults happen in places where there is nobody watching, no “eyes on the street”.

As I have explained more fully in my World View blog, Jagori, a women’s organisation based in Delhi, has undertaken safety audits through which local women identify the places where they feel at risk. Not surprisingly these tend to be dark areas, empty streets, underpasses and the like. The remedies that are proposed do depend partly on technology: in particular better lighting of public places. However, Jagori also argue for slowing the speed of traffic through an area and for facilitating vending and hawking alongside roads. Normally such a suggestion is enough to send a highways engineer spluttering with rage!

Are you safe in your town?
So we have two approaches with the shared aim of cutting crime and increasing security. One is formal, makes strong reliance on technology and “target-hardening” and is driven mainly by large private corporations in rich countries. The other is more informal, people-based and advocated by a women’s organisation in a developing country. Which is right for your town?

A starting point might be to do a safety audit. The approach is well established and very participatory. It largely involves walking around the town with vulnerable groups and hearing about where they feel safe or threatened. Where do they walk and which places do they deliberately avoid and why. There is a summary of an example of such an approach in a paper I wrote for the Commonwealth Secretariat that can be downloaded here.