grids - a project in a connection with TiF and PURR

Trans in Form project is supposed to communicate with other European projects bringing benefits to development and improvements in regions. Networking with a project PURR that we have informed Trans in Form readers about earlier now has found one more interesting project called grids. Best practice guidelines for regional development and strategies.

Authors of the book are Neil Adams (project coordinator, iris consulting and London South Bank University) and Neil Harris (Cardiff University). In addition you will find a long list of expert advisers. Neil Adams is also one of the researchers in PURR project.
For those who are new to the regional development we can tell the guidelines will be a lot of ideas and advices on economy, transport, housing, agriculture, tourism and nature.

The project is co-financed by the European Union 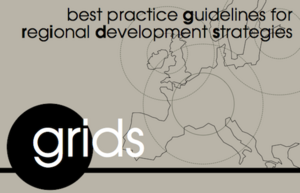