Apply now for the RegioStars Awards 2014

The Regional Policy DG of the European Commission has launched the 2014 RegioStars Awards. These Awards, as part of the Regions for Economic Change initiative, are targeted at the identification, dissemination and communication of good, innovative practices funded through the EU's Cohesion policy.

The application process for the 2014 RegioStars Awards is now open. The Award Categories for 2014 are:

Applications should be sent by 19 April 2013 to REGIO-STARS@ec.europa.eu . The selected finalists will have the opportunity to showcase their projects before an independent jury during the 11th annual European Week of Regions and Cities - OPEN DAYS 2013. The Award ceremony itself will take place in Brussels in early 2014. The Award Ceremony for the RegioStars Awards 2013 will be held on 31 January 2013 at the Palais des Beaux-Arts in Brussels.

Picture: In October 2012 the RegioStars Jury, chaired by Mr Luc Van den Brande, had chosen 27 across 5 categories that will compete for the final awards in a ceremony on 31 January 2013. (Copyright: Open Days - European Week of Cities and Regions via Flickr) 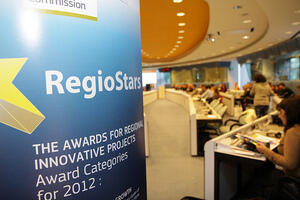