For the well-being of our Children

There is a special day for nearly all of us: we celebrate International women’s day and mother’s day, men’s and father’s day, veteran’s day … a world book day and a day for the trees. Unfortunately the youngest of our society get just very little attention on their special day: Tomorrow is International Children’s Day!

The International Children’s Day (ICD) is said to have originated in Turkey in 1920 and later in Geneva, Switzerland in 1925, when the World Conference for the Well-being of Children proclaimed June 1st to be International Children's Day. As different reports state Children's day was in a way a coincidence. Two important events took place on 1st June 1925. The first was the World Conference for the Well-being of Children in Geneva. At the same time the Chinese consul-general in San Francisco gathered a number of Chinese orphans to celebrate the Dragon Boat Festival. Since both these incidents had the idea of child welfare at their core, 1st of June began to be celebrated as International Children's Day thereafter.  And by the way, although this day was a popular event in communist countries, International Children’s Day has nothing to do with Communism.

The holiday is celebrated on 1 June each year. It is usually marked with speeches on children's rights and wellbeing, children TV programs, parties, various actions involving or dedicated to children. A Vietnamese supermarket chain e.g. offers 5 to 35 percent discounts on more than 350 items for children. Others created an event on facebook to help children with a donation of just 25 Cent. And Bilaal Rajan is taking off his socks and shoes to contribute to the well-being of children.

The Innovation Circle Network’s contribution to the International Children's Day will follow in August. ICN invites young people to the annual Summer Camp. From 5th to 8th of August young people from different countries will meet in Sjøglimt / Ørje (Norway) for an international get-together. Barbecuing and socialising, interesting presentations and workshops dealing with topics like equality, voting, gender and climate change as well as a Soccer and Volleyball Tournament will make this year’s Summer Camp another worthwhile ICN event. 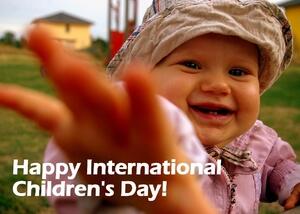